EUR/USD was extremely volatile after the release of US nonfarm payrolls today. Initially, the currency pair attempted to rally but failed to hold onto gains and was trading slightly below the opening by the session’s end.
Nonfarm payrolls showed a growth of employment by 196k in March, which exceeded the average forecast of 172k. The February reading got a revision from 20k to 33k. Unemployment rate remained stable at 3.8%. Average hourly earnings rose 0.1%, missing market expectations of 0.3% and slowing from the February 0.4% rate of growth. (Event A on the chart.)
Consumer credit rose $15.2 billion in February, missing the consensus forecast of $17.2 billion. The January increase got a positive revision from $17.0 billion to $17.7 billion. (Event B on the chart.)
Yesterday, a report on initial jobless claims was released, showing that unemployment claims were at the seasonally adjusted level of 202k last week, down from the previous week’s revised level of 212k. Analysts had predicted an increase to 215k. The actual figure was the lowest since December 1969. (Not shown on the chart.) 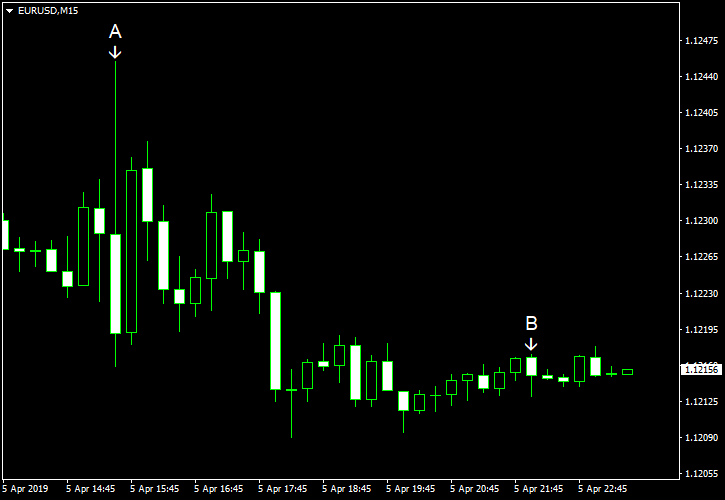