Two events should have had a big impact on the EUR/USD currency pair on Wednesday — the monetary policy meeting of the European Central Bank (event A on the chart) and the monetary policy minutes of the Federal Open Market Committee. Yet surprisingly, the pair settled a little higher despite both events turning out slightly negative for it. While EUR/USD was falling after each of the events, the pair was rebounding quickly after dipping.
US CPI rose 0.4% in March, exceeding the median forecast of 0.3% and the February 0.2% rate of growth. (Event A on the chart.)
Crude oil inventories swelled by 7.0 million barrels last week, exceeding the median forecast of an increase by 2.6 million barrels, and were at the five-year average for this time of year. The stockpiles surged by 7.2 million barrels the week before. Total motor gasoline inventories slumped by 7.7 million barrels but were also at the five-year average for this time of year. (Event B on the chart.)
FOMC released minutes of its March monetary policy meeting today. (Event C on the chart.) In the notes, the Committee reiterated that “patient approach to determining future adjustments to the target range for the federal funds rate remained appropriate” and revealed that the majority of Committee members expected no more interest rate hikes this year:

With regard to the outlook for monetary policy beyond this meeting, a majority of participants expected that the evolution of the economic outlook and risks to the outlook would likely warrant leaving the target range unchanged for the remainder of the year.

Yet there were those who though that higher rates may be necessary if economy performs well:

Some participants indicated that if the economy evolved as they currently expected, with economic growth above its longer-run trend rate, they would likely judge it appropriate to raise the target range for the federal funds rate modestly later this year.

Treasury budget deficit shrank to $146.9 billion in March from $234.0 billion in February. Experts were anticipating a smaller decrease to $194.7 billion. (Event C on the chart.)
On Monday, a report on factory orders was released showing a drop of 0.5% in February, which matched forecasts exactly. The indicator was unchanged in January. (Not shown on the chart.) 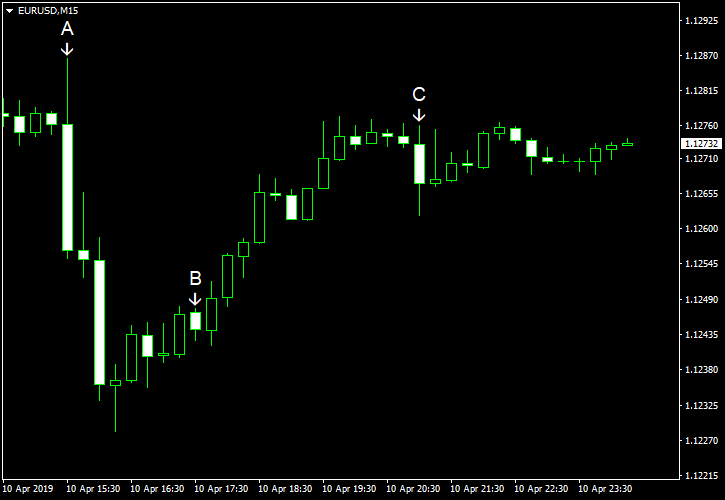