EUR/USD sank today following the releases of European Purchasing Managers’ Indices by Markit. While they were not completely negative, showing a mix of good and bad results, the currency pair did not respond well to the reports. US PMIs, on the other hand, were unquestionably disappointing, but that did not help the pair.
Retail sales rose 1.6% in March from the previous month after falling 0.2% in February. Analysts had expected a much smaller increase by 0.9%. (Event A on the chart.)
Philadelphia Fed manufacturing index dropped 13.7 in March to 8.5 in April, below the forecast level of 11.2. (Event A on the chart.)
Seasonally adjusted initial jobless claims slipped to 192k last week from the previous week’s revised level of 197k. That is instead of increasing to 207k as analysts had predicted. (Event A on the chart.)
Markit manufacturing PMI was at 52.4 in April, unchanged from the March’s reading, according to the flash estimate. Specialists had predicted an increase to 52.8. Flash Markit services PMI dropped from 55.3 in March to 52.9 in April, far below the forecast level of 55.0 and reaching the lowest level in more than two years. (Event B on the chart.)
Business inventories expanded by 0.3% in February, matching forecasts exactly. The January increase got a small revision from 0.8% to 0.9%. (Event C on the chart.)
Leading indicators rose 0.4% in March, also matching forecasts. The February increase got a negative revision from 0.2% to 0.1%. (Event C on the chart.) 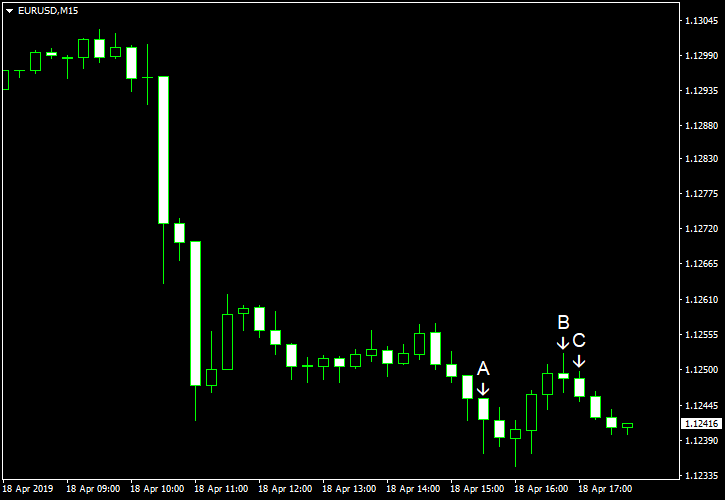