EUR/USD was falling today but jumped sharply at 14:00 GMT. The rally allowed the currency pair to settle flat. There were plenty of macroeconomic reports in the United States today, and most of them were disappointing.
Seasonally adjusted retail sales fell 0.2% in April instead of rising at the same rate as analysts had predicted. The sales were up 1.7% in March. (Event A on the chart.)
NY Empire State Index climbed from 10.1 to 17.8 in May, reaching the highest level in six months. That is instead of falling to 8.2 as specialists had forecast. (Event A on the chart.)
Industrial production and capacity utilization decreased in April. Industrial production fell 0.5% after rising 0.2% in March (revised from a drop by 0.1%). Experts did not expect any change. Capacity utilization edged down from 78.5% (revised from 78.8%) in March to 77.9% in April, missing the consensus forecast of 78.7%. (Event B on the chart.)
Business inventories were virtually unchanged in March from February, matching expectations, after rising 0.3% in the previous month. (Event C on the chart.)
US crude oil inventories expanded by 5.4 million barrels last week, surprising traders who did not expect any change, and were above the five-year average for this time of year. The stockpiles shrank by 4.0 million barrels the week before. Total motor gasoline inventories decreased by 1.1 million barrels and were below the five-year average. (Event D on the chart.)
Net foreign purchases were at -$28.4 billion in March. That is compared to the median forecast of $36.3 billion and the reading of $51.9 billion registered in February. (Event E on the chart.)
Yesterday, a report on import and export prices was released, showing an increase by 0.2% in April for both indicators after they both rose by 0.6% in March. (Not shown on the chart.) 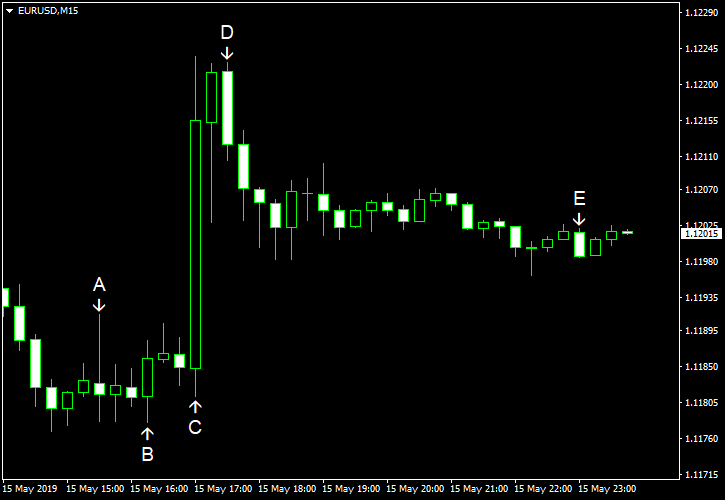