EUR/USD gained today as the euro was strong against other most-trade currencies despite markets being dominated by risk aversion. Traders were generally favoring safer currencies after US President Donald Trump talked about tariffs on imports from Mexico. It is surprising to see the euro strong in such environment. What makes it even more puzzling is today’s macroeconomic reports in the eurozone, all of which were worse than expected. As for US reports, some of them missed expectations, but none were outright bad.
Both personal income and spending increased in April. Income rose 0.5% after increasing 0.1% in March. That is compared to the consensus forecast of a 0.3% increase. Spending increased 0.3%, slightly more than analysts had predicted — 0.2%. The March increase got a positive revision from 0.9% to 1.1%. Core PCE inflation was at 0.2%, matching expectations. The March reading was revised from 0.0% to 0.1%. (Event A on the chart.)
Chicago PMI climbed to 54.2 in May from 52.6 in April but still failed to meet the consensus forecast of 55.1. (Event B on the chart.) The report noted:

Despite the pick-up in sentiment, the survey points to softness in business activity, as indicated by the three-month average slipping to a two-year low. Furthermore, it is evident that business confidence in Q2 is going to be significantly weaker than Q1, which already was at sluggish levels.

Michigan Sentiment Index rose to 100.0 in May from 97.2 in April according to the revised estimate. That is compared with the median forecast of 102.0 and the preliminary figure of 102.4. (Event C on the chart.) The report said:

Although consumer sentiment remained at very favorable levels, confidence significantly eroded in the last two weeks of May. 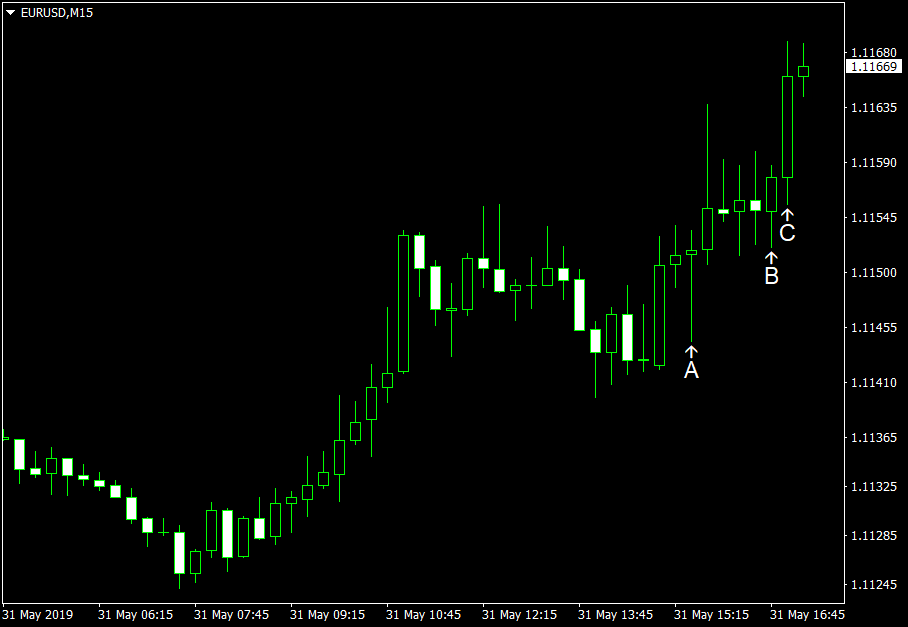