EUR/USD surged intraday as ADP employment report was surprisingly atrocious, showing barely any growth. Service industry data was confusing, as reports from Markit and Institute for Supply Management showed completely different results. The currency pair has retreated by now, though, trading below the opening level.
ADP employment rose by meager 27k in May from April. That is nowhere near the forecast increase of 185k, let alone the previous month’s gain by 271k. (Event A on the chart.)
Markit services PMI was at 50.9 in May according to the final estimate, down from 53.0 in April, indicating just a marginal expansion of the sector. The actual figure was exactly the same as the preliminary reading and analysts’ forecasts. (Event B on the chart.)
ISM services PMI rose to 56.9% in May, whereas analysts had predicted it to be about the same as the April value of 55.5%. (Event C on the chart.)
US crude oil inventories jumped by 6.8 million barrels last week instead of falling by 1.7 million barrels as experts had predicted. The stockpiles were down a little by 0.3 million barrels the week before. Total motor gasoline inventories increased by 3.2 million barrels. (Event D on the chart.)
Yesterday, a report on factory orders was released, showing a decrease of 0.8% in April. That is compared to the forecast drop by 1.0% and the March decrease by 1.3%. (Not shown on the chart.) 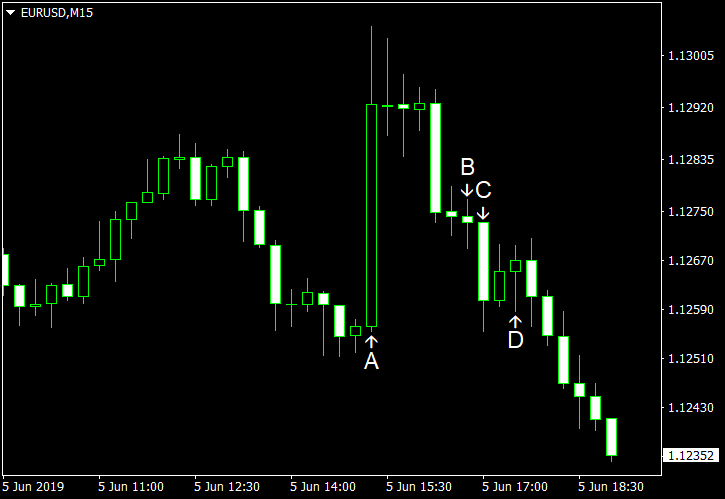