EUR/USD rose sharply today after the monetary policy announcement from the Federal Open Market Committee. While the FOMC did not change its policy at today’s meeting, the fact that the statement dropped the word “patient” led to speculations that an interest rate cut may happen as soon as the next meeting in July. Furthermore, the projections revealed that about half of the FOMC members anticipate a cut by the end of the year.
US crude oil inventories dropped 3.1 million barrels last week, two times the forecast amount of 1.5 million barrels. Nevertheless, the stockpiles remained above the five-year average for this time of year. The week before, the reserves were up by 2.2 million barrels. Total motor gasoline inventories dropped by 1.7 million barrels but also remained above the five-year average. (Event A on the chart.)
FOMC left the target range for the federal funds rate unchanged at 2.25%-2.5%, as was widely expected. The Committee said in the statement:

The Committee continues to view sustained expansion of economic activity, strong labor market conditions, and inflation near the Committee’s symmetric 2 percent objective as the most likely outcomes, but uncertainties about this outlook have increased. In light of these uncertainties and muted inflation pressures, the Committee will closely monitor the implications of incoming information for the economic outlook and will act as appropriate to sustain the expansion, with a strong labor market and inflation near its symmetric 2 percent objective. 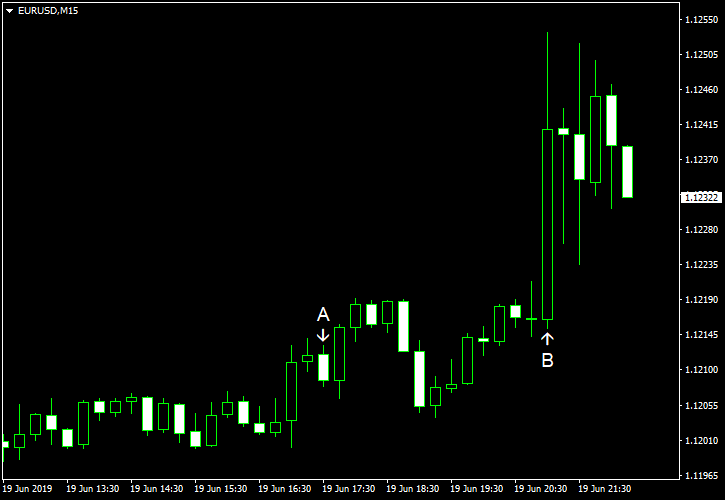