EUR/USD was moving sideways today amid somewhat directionless trading. On one hand, the market sentiment was lifted by comments from Treasury Secretary Steven Mnuchin that suggested the United States and China are close to reaching a trade deal. On the other, the dollar got boost from comments of Fed officials yesterday. St. Louis Federal Reserve Bank President James Bullard dismissed the idea of a 50 basis point interest rate cut, while Federal Reserve Chair Jerome Powell said that “monetary policy should not overreact to any individual data point or short-term swing in sentiment”. As for today’s macroeconomic data, the US docket was very light on events.
Durable goods orders dropped 1.3% in May, whereas analysts had predicted them to stay about unchanged. Furthermore, the April drop got a negative revision from 2.1% to 2.8%. (Event A on the chart.)
US crude oil inventories slumped by 12.8 million barrels last week, surprising experts who were anticipating a much smaller decrease by 2.7 million barrels. Nevertheless, the stockpiles remained above the five-year average for this time of year. The week before, the reserves declined by 3.1 million barrels. Total motor gasoline inventories declined by 1.0 million barrels and were at the five-year average. (Event B on the chart.) 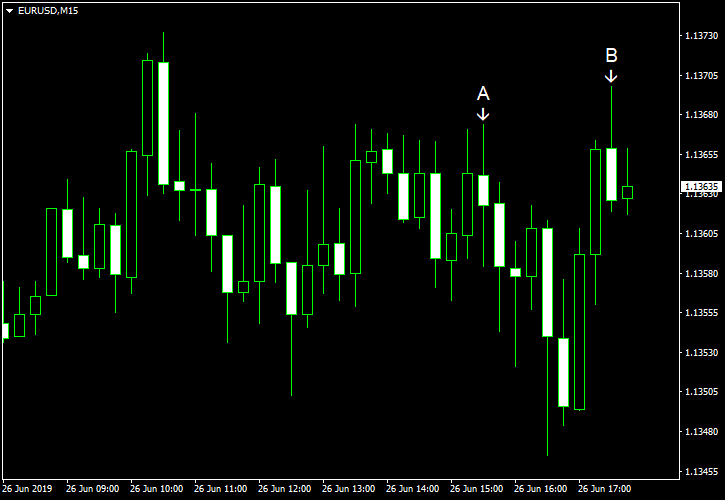