EUR/USD gained today. Market analysts speculated that the reason for the rally were inflation figures released in the eurozone today, most of which exceeded expectations and showed accelerating inflation. Meanwhile, US core PCE inflation remained stable, and other macroeconomic indicators were mixed.
Both personal income and spending rose in May. Personal income rose 0.5%, the same as in April and exceeding the average forecast of an increase by 0.3%. Personal spending increased 0.4%, below the consensus of a 0.5% increase and the previous month’s revised gain of 0.6%. Core PCE inflation remained steady at 0.2%, matching expectations. (Event A on the chart.)
Chicago PMI dropped to 49.7 in June from 54.2 in May. Analysts had expected just a mild decrease to 54.0. That was the first reading below the neutral 50.0 level since January 2017. (Event B on the chart.)
Richmond Sentiment Index fell to 98.2 in June from 100.0 in May according to the revised estimate. That was a better reading than forecast 97.4 and preliminary 97.9. (Event C on the chart.) 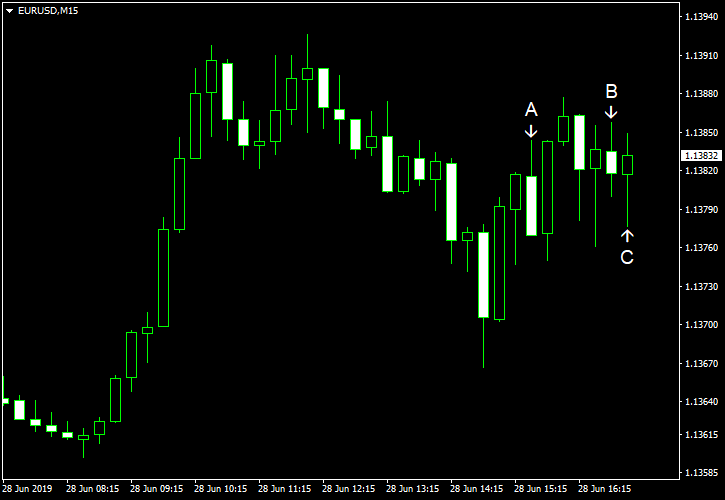