The US dollar was firm today after the reports that the United States and China managed to achieve a truce, agreeing not to escalate the trade war further. That led to hopes that the US economy will face less pressure, and as a result the Federal Reserve will have fewer reasons to cut interest rates. Reacting to the news, EUR/USD dropped on Monday’s trading session. While the currency pair has trimmed some of its losses by now, it is still trading far below the opening level.
Markit manufacturing PMI was at 50.6 in June according to the revised estimate, almost unchanged from May’s 50.5. Ahead of the report, market participants were counting on the same 50.1 figure as in the preliminary report. (Event A on the chart.)
ISM manufacturing PMI fell from 52.1% in May to 51.7% in June. That was still a better reading than 51.3% predicted by analysts. (Event B on the chart.)
Construction spending dropped 0.8% in May from April. That was a nasty surprise to traders who were counting on a small increase by 0.1%. The April reading got a positive revision from “no change” to an increase by 0.4%. (Event B on the chart.) 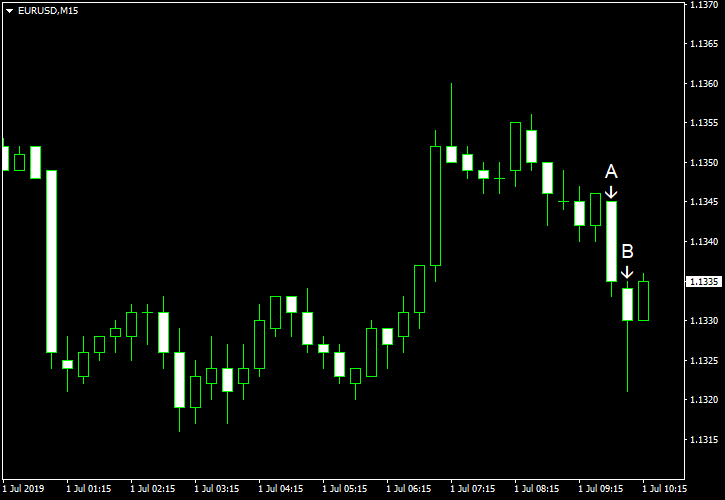