EUR/USD was volatile today, swinging back and forth between gains and losses. Currently, the EUR/USD pair trades near the opening level. The most notable piece of data released in the United States today was the employment report from Automatic Data Processing, which missed market expectations. Most other releases were bad as well, hurting the US dollar.
ADP employment rose by 102k in June, failing to reach the market consensus of a 140k increase. The abysmal May reading of a 27k increase got a small positive revision to 41k. (Event A on the chart.)
Trade balance deficit was at $55.5 billion in May, up from revised $51.2 billion in April. The actual trade gap was bigger than $53.2 billion predicted by economists. (Event B on the chart.)
Initial jobless claims were at the seasonally adjusted level of 221k last week, in line with market expectations, down from the previous week’s revised level of 229k (227k before the revision). (Event B on the chart.)
Markit services PMI was up to 51.5 in June from 50.9 in May according to the revised estimate. Market participants were anticipating the same 50.7 reading as in the preliminary estimate. (Event C on the chart.)
ISM services PMI, on the other hand, dropped to 55.1% in June from 56.9% in May, below the market consensus of 56.1%. (Event D on the chart.)
Factory orders dropped 0.7% in May. That is compared to the predicted decline of 0.4% and the previous month’s revised drop of 1.2% (0.8% before the revision). (Event D on the chart.)
US crude oil inventories decreased by 1.1 million barrels last week but remained above the five-year average for this time of year. Experts were counting on a bigger drop by 2.8 million barrels. The week before, the stockpiles slumped by as much as 12.8 million barrels. Total motor gasoline inventories dropped by 1.4 million barrels last week and were at the five-year average. (Event E on the chart.) 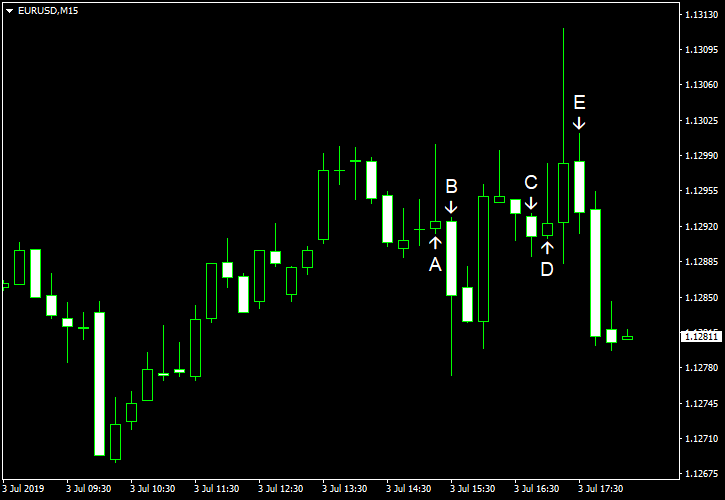