EUR/USD continued to fall after yesterday’s huge slump caused by the monetary policy decision of the Federal Open Market Committee. While the FOMC cut interest rates, such decision was expected, and markets were disappointed by lack of hints at additional cuts in the future. By now, the currency pair has trimmed its losses, though.
Initial jobless claims were at the seasonally adjusted level of 215k last week, up from 207k the week before. That is compared with 212k predicted by analysts. (Event A on the chart.)
Markit manufacturing PMI wast 50.4 in July according to the final estimate, down a little from 50.6 in June. Market participants were expecting the same 50.0 figure as in the preliminary estimate. (Event B on the chart.)
ISM manufacturing PMI fell to 51.2% in July from 51.7% in June instead of rising to 52.0% as analysts had predicted. (Event B on the chart.)
Construction spending dropped 1.3% in June from May, whereas experts had predicted an increase of 0.5%. May’s decrease got a positive revision from 0.8% to 0.5%. (Event B on the chart.) 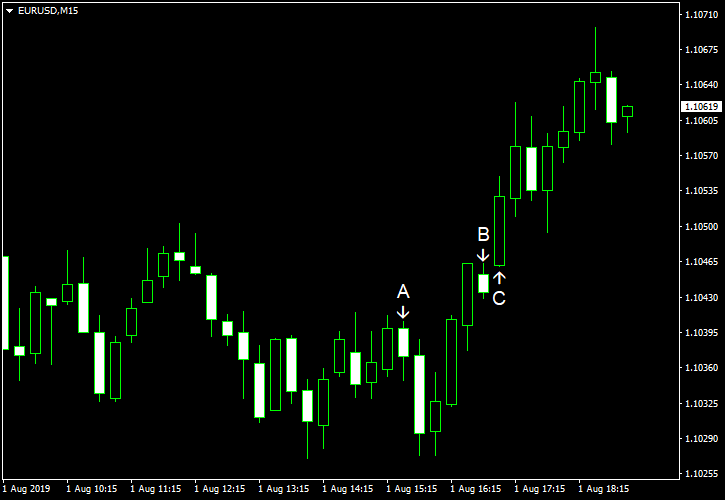 On Friday (July 26) an advance report on US GDP was released, showing an increase at an annual rate of 2.1% in Q2 2019. That is compared with an increase of 1.8% predicted by specialists and a 3.1% gain posted in Q1. (Not shown on the chart.)
On Tuesday (July 30), several reports were released (not shown on the chart):
Personal income rose 0.4% in June from the previous month after rising 0.4% in May. Personal spending rose 0.3% after increasing 0.5% in the preceding month. Both indicators matched forecasts. Core PCE inflation remained at 0.2%, unchanged from May and within expectations.
S&P Case-Shiller home price index rose 2.4% in May, year-on-year, matching the consensus forecast, after increasing 2.5%. Month-on-month, the index increased 0.6%.
Consumer confidence climbed to 135.7 in July from the positively revised 124.3 in June (121.5 before the revision). Experts had predicted a much smaller increase of 125.1.
Pending home sales climbed 2.8% in June, beating the median forecast of a 0.5% increase by a wide margin. The indicator increased by 1.1% in May.
On Wednesday (July 31), also several reports were released (not shown on the chart):
ADP employment increased by 156k in July, a little bit more than analysts had predicted — 150k. June’s increase got a small positive revision from 102k to 112k.
Chicago PMI fell to 44.4 in July from 49.7 in June, whereas experts had predicted an increase to 51.7.
US crude oil inventories dropped by 8.5 million barrels last week, more than specialists had forecast — 2.5 million barrels, and were the five-year average for this time of year. The week before, the stockpiles shrank by 10.8 million barrels. Total motor gasoline inventories decreased by 1.8 million barrels but remained above the five-year average.
FOMC cut the range for the federal funds rate by 25 basis points to 2%-2.25%. Such a decision was expected by the majority of market participants, though some of them were expecting a 50 basis point cut. Yet markets were disappointed that the Committee did not commit to additional cuts, saying:

As the Committee contemplates the future path of the target range for the federal funds rate, it will continue to monitor the implications of incoming information for the economic outlook and will act as appropriate to sustain the expansion, with a strong labor market and inflation near its symmetric 2 percent objective.