EUR/USD remained volatile today. The currency pair rallied sharply on positive eurozone PMI figures but retreated afterward. The pair attempted to rally once again after the European Central
Bank released minutes of its latest monetary policy minutes. But EUR/USD failed to maintain rally once again and is now trading below the opening level.
Initial jobless claims were at the seasonally adjusted level of 209k last week, down from the previous week’s revised level of 221k. The consensus forecasts promised a much smaller drop to 217k. (Event A on the chart.)
Both
Markit manufacturing PMI and Markit services PMI
fell in August according to the flash estimates. Markit manufacturing PMI fell to 49.9 from 50.4, slipping into the contraction territory and reaching the lowest level in almost 10 years. Markit services PMI dropped to 50.9 from 53.0. Analysts had expected both indices to stay about unchanged. (Event B on the chart.)
Consumer confidence rose by 0.5% in July after falling by 0.1% in June. Experts had predicted a smaller increase of 0.2%. (Event C on the chart.) 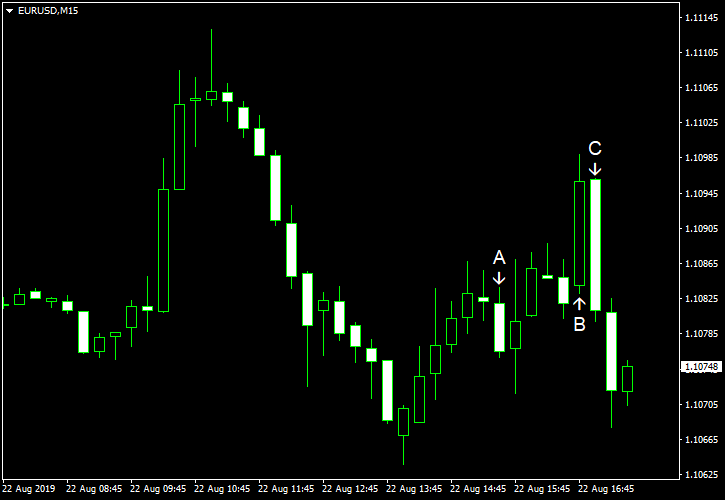