EUR/USD declined today for the fourth consecutive trading session. The main piece of news today was the fact that China’s rhetoric softened a bit, signaling that China’s government is willing to negotiate with the United States in order to end the trade war.
US GDP rose 2.0% in Q2 2019 according to the preliminary (second) estimate after rising 3.1% in Q1. The figure matched forecasts and was a notch lower than the advance (first) estimate. (Event A on the chart.)
Initial jobless claims edged up to 215k last week (seasonally adjusted) from 211k the week before. The actual value was in line with market expectations. (Event A on the chart.)
Pending home sales dropped 2.5% in July from the previous month after rising 2.8% in June. Market participants were expecting the indicator to be almost unchanged. (Event B on the chart.)
Yesterday, a report on crude oil inventories was released, showing a draw of 10 million barrels last week. Experts had predicted the reduction to be about the same as the 2.7 million barrel draw the week before. Total motor gasoline inventories decreased by 2.1 million barrels. (Not shown on the chart.) 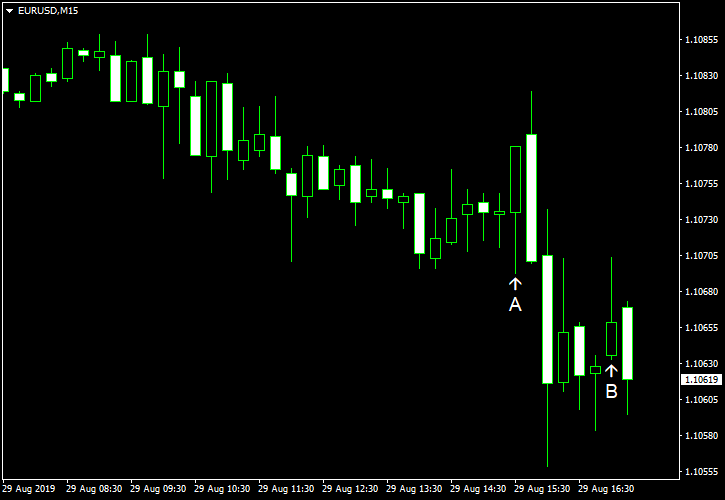