EUR/USD Rebounds After US Manufacturing PMI

EUR/USD crashed today but has managed to rebound by now. The currency pair moved sharply higher after the release of US manufacturing indices. The reports were contradicting as the data from Markit showed that the US manufacturing sector was expanding, albeit just barely, while the ISM indicator showed that the sector turned from expansion into contraction. Apparently, markets paid more attention to the negative portion of the data, allowing the euro to bounce to the opening level against the dollar.
Markit manufacturing PMI was at 50.3 in August according to the final estimate, little changed from 50.4 in July. The actual reading was better than forecast 50.0 and the flash estimate of 49.9. (Event A on the chart.)
Meanwhile, ISM manufacturing PMI slid to 49.1% in August from 51.2% in July. That was a total surprise to markets as they were not expecting any change to the index. (Event B on the chart.)
Construction spending rose 0.1% in July from June versus the median forecast of a 0.3% increase. The drop in June got a positive revision from 1.3% to 0.7%. (Event B on the chart.) 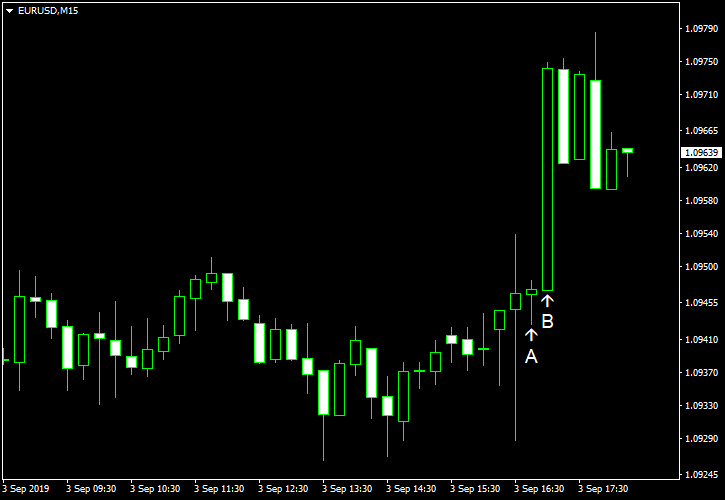