EUR/USD was rising during Thursday’s trading session despite the positive news about the US-China conflict and strong employment growth in the United States. Only after the services index from the Institute for Supply Management surprised markets by a much-bigger-than-expected jump the currency pair retreated to trade near the opening level as of now.
ADP employment rose by 195k in August, exceeding the average forecast of 148k. The July figure got a negative revision from 156k to 142k. (Event A on the chart.)
Nonfarm productivity rose by 2.3% in Q2 2019, the same as in Q1. The actual increase was close to a rise of 2.2% predicted by experts. (Event B on the chart.)
Initial jobless claims were at the seasonally adjusted level of 217k last week, up from the previous week’s revised level of 216k and near the forecast figure of 215k. (Event B on the chart.)
Markit services PMI dropped from 53.0 in July to 50.7 in August according to the final estimate. The figure was slightly below the preliminary estimate of 50.9 and the consensus forecast of 51.0. (Event C on the chart.)
ISM services PMI climbed to 56.4% in August from 53.7% in July, far above the forecast level of 54.0%. (Event D on the chart.)
Factory orders increased by 1.4% in July. That is compared with the consensus forecast of a 1.0% increase and the previous month’s gain of 0.5%. (Event D on the chart.)
US crude oil inventories dropped by 4.8 million barrels last week, two times the forecast amount of 2.4 million barrels, and were at the five-year average for this time of year. Total motor gasoline inventories decreased by 2.4 million barrels but were above the five-year average. (Event E on the chart.)
Yesterday, a report on trade balance was released, showing a decrease of the deficit from $55.5 billion in June to $54.0 billion in July, in line with economists’ forecasts. (Not shown on the chart.) 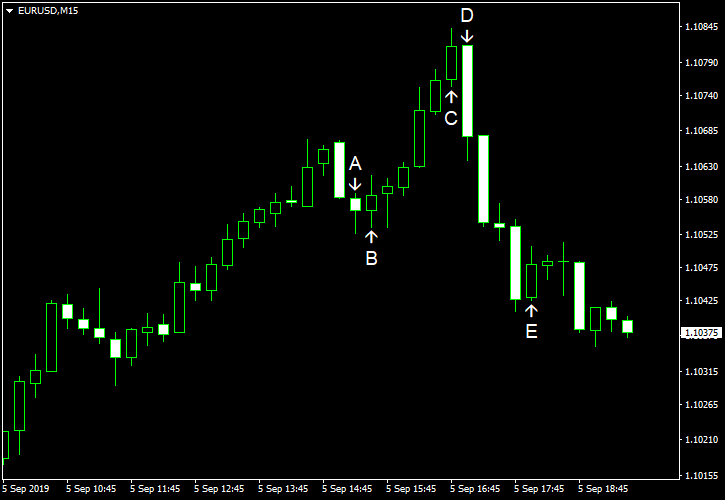