EUR/USD started the week extremely soft, demonstrating a big drop on Monday. Market analysts speculated that the reason for the decline were dovish comments from European Central Bank officials, which suggested the central bank will maintain or even expand its monetary stimulus. Additionally, speculators trimmed bets on interest rate cuts from the Federal Reserve, though they generally still anticipate a cut this week.
NY Empire State Index dropped to 2.0 in September from 4.8 in August, far below the forecast level of 4.1. (Event A on the chart.) 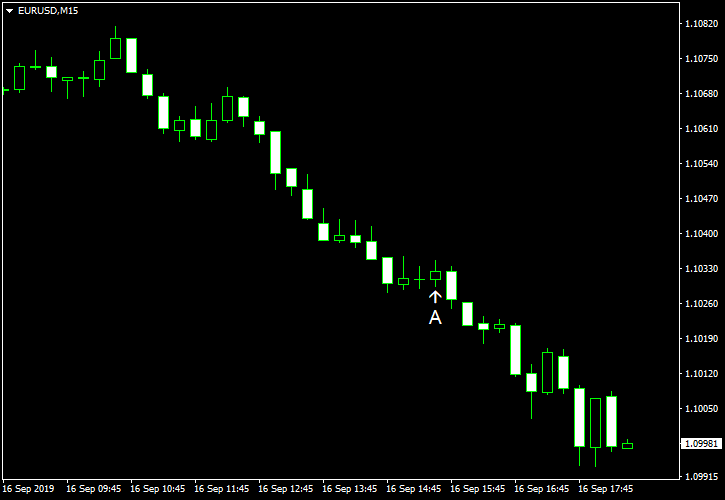 On Friday, several reports were released (not shown on the chart):
Retail sales rose 0.4% in August, two times as fast as analysts had predicted. Furthermore, the July increase got a positive revision from 0.7% to 0.8%.
Import and export prices fell in August. Import prices dropped 0.5%, matching forecasts exactly, after rising 0.1% in July. Export prices declined 0.6% following a 0.2% increase in the previous month.
Michigan Sentiment Index climbed to 92.0 in September from 89.8 in August according to the preliminary estimate. Experts had predicted a smaller increase to 90.4.
Business inventories rose 0.4% in July, slightly more than analysts had predicted — 0.3%. The indicator showed no change in the previous month.
If you have any comments on the recent EUR/USD action, please reply using the form below.