EUR/USD dropped today after the Federal Open Market Committee performed an interest rate cut. While markets were anticipating such move was for some time now, ahead of the announcement doubts started to creep in. And while the Committee did make a cut after all, markets considered the statement to be more hawkish than was expected. Moreover, FOMC projections did not show more cuts both in this year and the next.
Housing starts and building permits rose in August. Housing starts were at the seasonally adjusted annual rate of 1.36 million, up from the previous months revised level of 1.22 million. Building permits were at the seasonally adjusted annual rate of 1.42 million, up from 1.32 million. That is compared to the consensus forecast of 1.25 million for housing starts and 1.31 million for building permits. (Event A on the chart.)
US crude oil inventories rose by 1.1 million barrels last week instead of falling by 2.1 million barrels as analysts had predicted, though the reserves stayed below the five-year average for this time of year. The increase followed the previous week’s big slump of 6.9 million barrels. Total motor gasoline inventories rose by 0.8 million barrels and were above the five-year average. (Event B on the chart.)
FOMC cuts its target range for the federal funds rate by 25 basis points to 1.75%-2%. The statement did not speak about additional cuts in the future, saying that “the Committee will assess realized and expected economic conditions relative to its maximum employment objective and its symmetric 2 percent inflation objective”. But the projections showed that policymakers anticipate interest rates stay at the current range by the end of 2019 and throughout 2020. (Event C on the chart.) 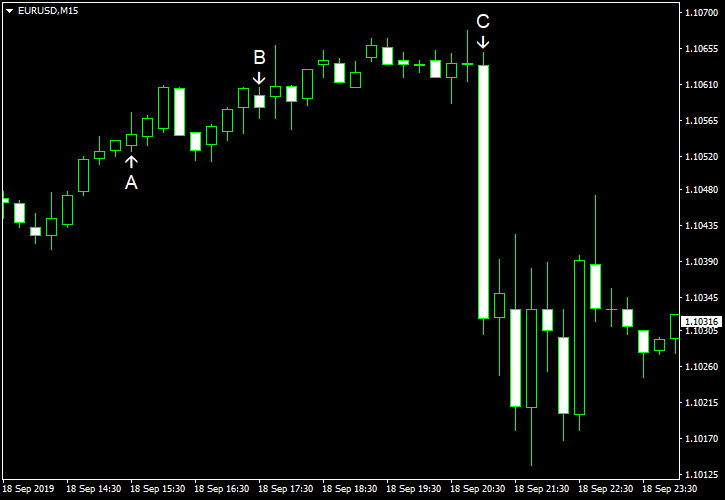