EUR/USD reversed its movement, rising today following yesterday’s drop caused by the hawkish interest rate cut by the Federal Open Market Committee. Markets are still trying to digest the FOMC statement and understand whether the cut was the end of the mid-cycle adjustment. As for today’s US macroeconomic data, it was mixed, giving no edge to the dollar.
Philadelphia Fed manufacturing index dropped to 12.0 in September from 16.8 in August. Analysts had predicted an even bigger drop to 10.9.(Event A on the chart.)
Current account balance deficit narrowed to $128.2 billion in Q2 2019 from $136.2 billion in Q1, matching forecasts. (Event A on the chart.)
Initial jobless claims were at the seasonally adjusted level of 208k last week. That is compared with the previous week’s revised level of 206k and the median forecast of 210k. (Event A on the chart.)
Leading indicators were unchanged in August, whereas analysts had predicted a small increase of 0.1%. The previous month’s gain got a negative revision from 0.5% to 0.4%. (Event B on the chart.)
Existing home sales were at a seasonally adjusted annual rate of 5.49 million in August versus the forecast reading of 5.39 million and July figure of 5.42 million. (Event B on the chart.) 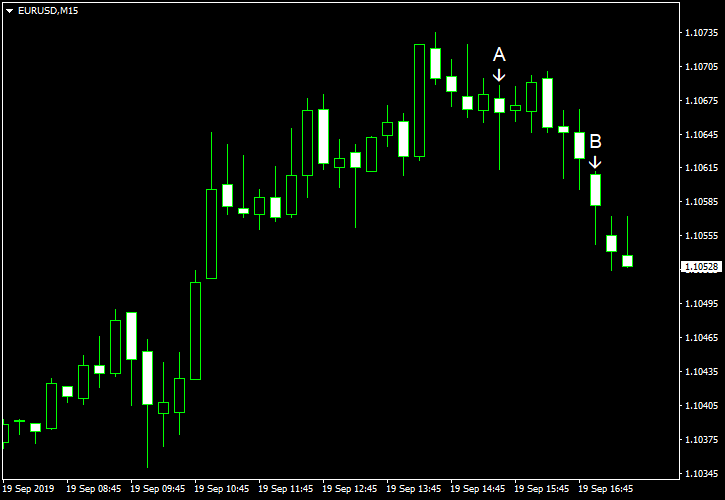