EUR/USD rallied today as the United States blacklisted several Chinese companies just a day before the resumption of trade talks between the USA and China. The Federal Open Market Committee released minutes of its latest policy meeting, but they did not have a particularly noticeable impact on the currency pair.
Wholesale inventories rose 0.2% in August, while market participants were counting on the same 0.4% increase as in July. (Event A on the chart.)
US crude oil inventories increased by 2.9 million barrels last week, exceeding the average forecast of an increase of 1.8 million barrels. The week before, the stockpiles rose by 3.1 million barrels. Total motor gasoline inventories decreased by 1.2 million barrels. (Event B on the chart.)
FOMC released today minutes of its September monetary policy meeting, at which policymakers decided to perform a 25 basis point interest rate cut. The majority of the Committee members voted for the decision, with two members preferring to keep the main interest rate unchanged, while one argued for a deeper cut by 50 basis points. Some members voiced concerns that markets expect more monetary easing than policymakers actually plan to do (event C on the chart):

A few participants judged that the expectations regarding the path of the federal funds rate implied by prices in financial markets were currently suggesting greater provision of accommodation at coming meetings than they saw as appropriate and that it might become necessary for the Committee to seek a better alignment of market expectations regarding the policy rate path with policymakers’ own expectations for that path. Several participants suggested that the Committee’s postmeeting statement should provide more clarity about when the recalibration of the level of the policy rate in response to trade uncertainty would likely come to an end. 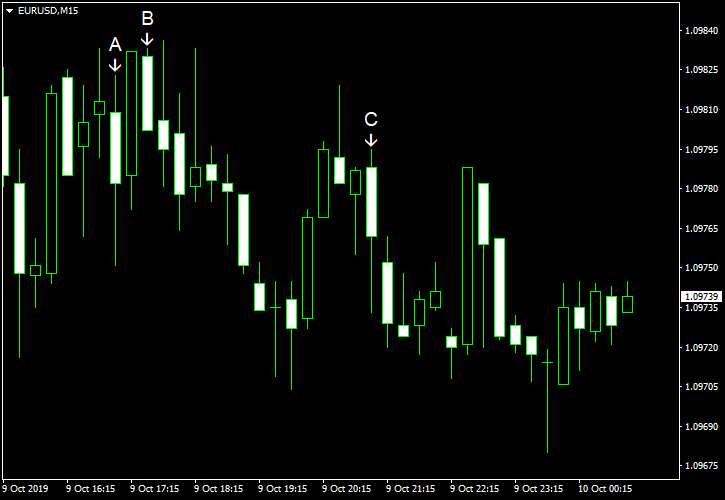