EUR/USD attempted to rally intraday after the release of a worse-than-expected report on US durable goods orders but retreated very quickly afterwards. The currency pair did not respond to the better-than-expected manufacturing print.
Durable goods orders dropped by 1.1% in September, more than analysts had predicted — 0.5%. The indicator rose 0.3% the month before. (Event A on the chart.)
Initial jobless claims were at a seasonally adjusted level of 212k last week, down from the previous week’s revised level of 218k. That is compared with the median forecast of 216k. (Event A on the chart.)
Both Markit manufacturing PMI and Markit services PMI rose in October according to the flash report. Markit manufacturing PMI rose to 51.5 from 51.1 in September. Markit services PMI inched up marginally to 51.0 from 50.9. That is compared with the forecasts of 50.7 and 51.0 for manufacturing and services respectively. (Event B on the chart.)
New home sales were at a seasonally adjusted annual rate of 701k in September, down from the revised August rate of 706k (713k before the revision). The consensus forecast had promised a reading of 710k. (Event C on the chart.)
Yesterday, a report on crude oil inventories was released, showing a drop of 1.7 million barrels last week instead of an increase of 2.5 million barrels predicted by analysts. The stockpiles swelled by 9.3 million barrels the week before. Total motor gasoline inventories decreased by 3.1 million barrels. (Not shown on the chart.) 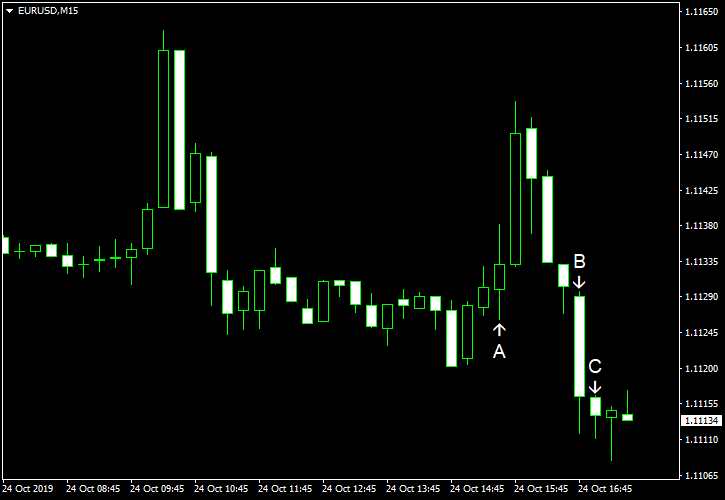