EUR/USD Rallies After Eurozone Data, Keeps Gains After US Releases

EUR/USD rallied during Friday’s trading session. The currency pair advanced after eurozone data suggested that the economy of the region is stabilizing. US macroeconomic releases did not stop the rally as the majority of indicators were disappointing.
US retail sales rose by 0.3% in October, exceeding the median forecast of a 0.1% increase. The sales were down by 0.3% in the previous month. (Event A on the chart.)
NY Empire State Index fell to 2.9 in November from 4.0 in October. That is instead of rising to 6.1 as analysts had predicted. (Event A on the chart.)
Import prices fell by 0.5% in October after increasing by 0.1% in the previous month. Specialists had promised a smaller decline of 0.2%. Export prices fell by 0.1% following the 0.2% decline in September. (Event A on the chart.)
Both industrial production and capacity utilization decreased in October. Industrial production dropped by 0.8% after falling by 0.3% in September. Analysts had predicted a much smaller decline of 0.4%. Capacity utilization decreased to 76.7% from 77.5%, below the consensus forecast of 77.2%. (Event B on the chart.)
Business inventories were unchanged in September, whereas experts had forecast a small increase of 0.1%. The inventories declined by 0.1% in the preceding month. (Event C on the chart.) 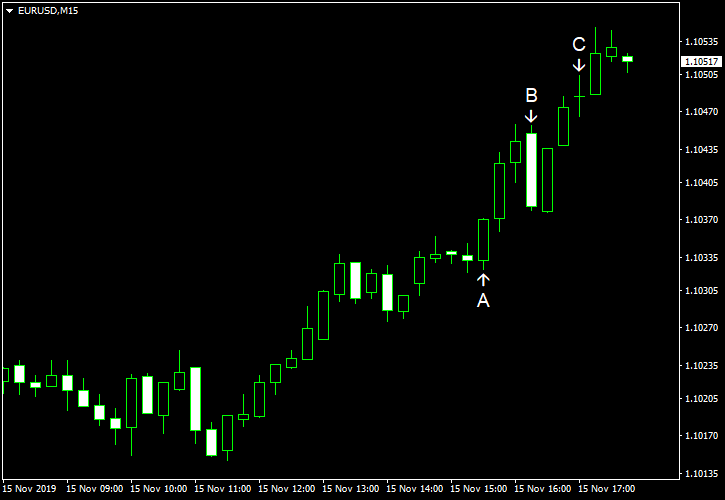