EUR/USD Slumps as US Manufacturing Grows

EUR/USD extended its slump for the third day as US manufacturing expanded last month, while it was expected to decline, and jobless claims decreased last week. As for negative news, construction spending didn’t rose as was predicted, but showed a noticeable drop.
Initial jobless claims (seasonally adjusted) decreased to 409k last week from the previous week’s revised figure of 421k (was 417k before the revision), exactly as analysts predicted. (Event A on the chart.)
Nonfarm productivity decreased at a 0.7% annual rate during the second quarter of 2011, following the 1.8% increase in the previous quarter. The preliminary estimate was 0.3%, while experts thought that the revision would show 0.4% decline. (Event A on the chart.)
ISM PMI was at 50.6% in August, almost unchanged from July value of 50.9%. That’s much better result from economists’ estimates of 48.7% as a value below 50.0% means decline of manufacturing. (Event B on the chart.)
Construction spending contracted 1.3% in July from June, following growth by 1.6% in June (revised up from 0.2%). Markets were too optimistic, expecting an increase by 0.2%. (Event B on the chart.) 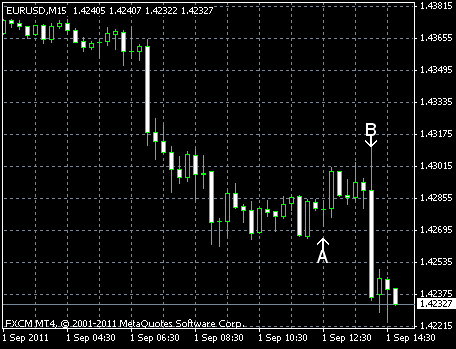