EUR/USD posted a biggest drop in a month today as European Central Bank President Trichet said that the ECB policy makers “expect the euro area economy to grow moderately, subject to particularly high uncertainty and intensified downside risks”. (Event A on the chart.) Market participants speculated that such words mean the ECB may cut its interest rates. Federal Reserve Chairman Ben S. Bernanke also spoke today, talking about “a range of tools that could be used to provide additional monetary stimulus”, but again without elaborating. (Event C on the chart.) US macroeconomic data was positive, for the most part, with the exception of unexpectedly increased jobless claims.
US trade balance deficit was $44.8 billion in July, down from $51.6 billion in June. Market participants expected higher deficit of $50.6 billion. (Event A on the chart.)
Initial jobless claims increased to 414k last week from the previous week’s figure of 412k (revised from 409k), instead of going down to 407k as was predicted by market analysts. (Event A on the chart.)
Crude oil inventories decreased by 4.0 million barrels and total motor gasoline inventories increased by 0.2 million barrels last week. (Event B on the chart.)
Consumer credit edged up to $12.0 billion in July from $11.3 billion in June (revised from $15.5 billion), while traders expected a decline to $6.3 billion. (Event D on the chart.)
On September 6, a report about ISM services PMI was released, showing a jump from 52.7% to 53.3%. (Not shown on the chart.) 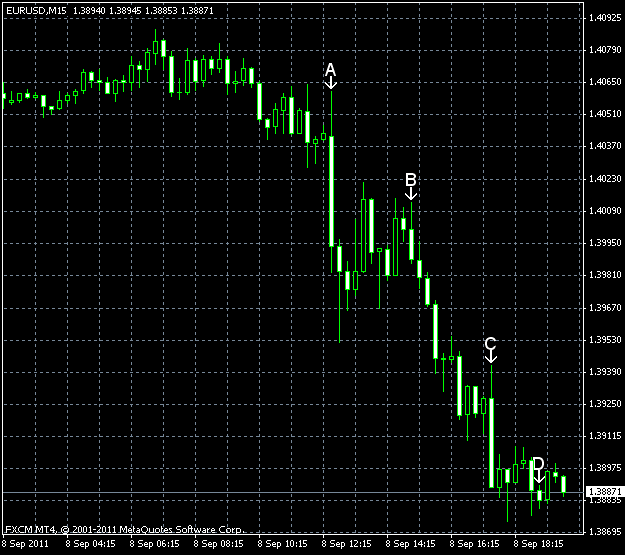