EUR/USD rose today for the second day as the European Central Bank announced it will lend dollar to the bank of the Eurozone, reducing concerns about liquidity. There was plenty of macroeconomic data from the US, but it was rather confusing. Consumer prices, current account and industrial production signaled about recovery of the US economy, while jobless claims and manufacturing indexes signaled about stagnation.
Initial jobless claims rose to 428k from 417k (revised from 414k) last week. Forex market participants hope the claims to decrease to 410k. (Event A on the chart.)
CPI rose 0.4% in August on a seasonally adjusted basis, while the expected growth was 0.2%. The consumer prices increased 0.5% in July. (Event A on the chart.)
The US current account balance deficit decreased to $118.0 billion (preliminary) in the second quarter of 2011, from $119.6 billion (revised) in the first quarter. Forecasters promised an increase to $122.0 billion. (Event A on the chart.)
NY Empire State Index dropped from -7.7 in August to -8.8 in September. The report proved traders wrong to expect a decrease to -3.9. (Event A on the chart.)
Industrial production and capacity utilization rate grew in August. Industrial production increased 0.2% in August after rise 0.9% in July. The actual value was slightly above the forecast 0.1%. Capacity utilization rate increased slightly to 77.4% in August, in line with forecasts of 77.5%. The utilization rate in July was revised from 77.5% to 77.3%. (Event B on the chart.)
Philadelphia Fed Manufacturing Index rose from -30.7 in August to -17.5 in September, being somewhat below the expected level of -14.7. (Event C on the chart.) 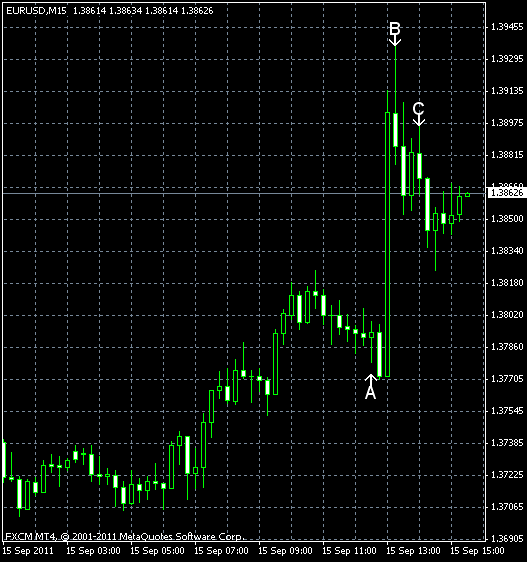