EUR/USD was falling today, started a strong rally at about 14:15 GMT, but now it looks like the currency pair resumed its decline. Today’s reports weren’t far from forecasts, were near the previous reading and likely had little impact on the performance of the currency pair. Yesterday’ FOMC minutes were important, though, as they showed readiness of the US policy makers to stimulate the economy. The euro fluctuated as traders hope the European leader would battle the credit crisis, but are unsure whether the actions of the politicians would cause good or harm.
The US trade balance posted a deficit of $45.6 billion in August. It was unchanged from the revised July reading and closed to the median forecast of $46.0 billion. (Event A on the chart.)
Initial jobless claims was at 404k in the week ended October 8, little changed from the previous week’s 405k and near the predicted value of 406k. (Event A on the chart.)
Crude oil inventories increased by 1.3 million barrels, while total motor gasoline inventories decreased by 4.1 million barrels last week. (Event B on the chart.)
Yesterday, the minutes of the FOMC monetary policy meeting were released, showing the US policy makers are considering additional stimulus for the US economy. (Not shown on the chart.) The minutes said:

Committee Policy Action
In the discussion of monetary policy for the period ahead, most members agreed that the revisions to the economic outlook warranted some additional monetary policy accommodation to support a stronger recovery and to help ensure that inflation, over time, was at a level consistent with the Committee’s dual mandate. 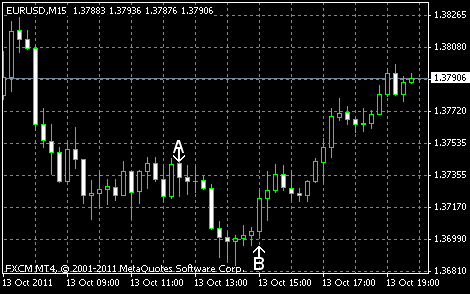