EUR/USD gained today after two days of losses on the news that Greece will receive a bailout and a progress in a forming new government was made. US fundamentals were mixed. Import prices fell and the trade balance deficit rose. On the positive side, export prices increased and the federal budget balance had its first surplus since 2008.
US trade balance deficit increased to $51.8 billion in March from $45.4 billion in February, a slightly bigger increase than the previously estimated rise to $49.8 billion. (Event A on the chart.)
Initial jobless claims were almost unchanged at 367k last week from the previous week’s 368k and in line with forecast of 371k. (Event A on the chart.)
Import prices declined 0.5% in April, following the 1.5% increase in March (revised from 1.3%). Forecasters promised a small 0.1% decline. Import prices were up 0.4% after the 0.8 percent increase in March. (Event A on the chart.)
Treasury budget posted a surplus of $59.1 billion in April, compared with the median forecast of $30.5 billion and the March deficit of $198.2 billion. That was the first surplus since September 2008. (Event B on the chart.) 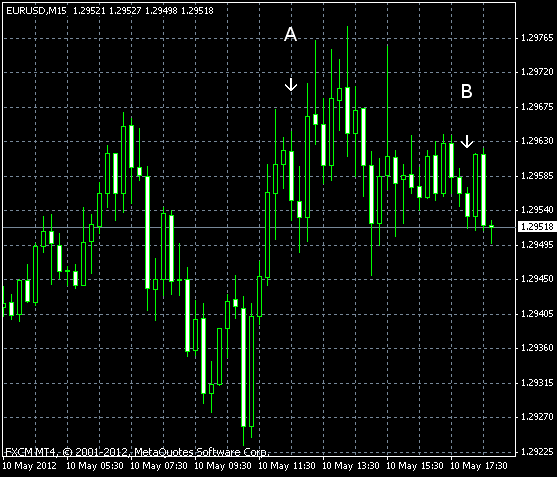