EUR/USD attempted to rally today, but failed and now stays flat. Earlier, the currency pair reached the lowest level since July 1, 2010. The crisis in Europe persists and analysts would likely consider any gains just a correction in a bear market. News from the United States was not encouraging today. Economic growth slowed, PMI unexpectedly fell and the labor data were not favorable.
ADP employment report showed an increase by 133k in May from April. The rise was a little smaller than the 145k predicted by analysts, but still above the April value of 113k. (Event A on the chart.)
GDP rose 1.9% in the first quarter of 2012, according to the preliminary report. The figure was lower than in the advance report (2.2%) and in the fourth quarter of 2011 (3.0%). (Event B on the chart.)
Initial jobless claims climbed from 373k to 383k last week, instead of falling to 369k as was expected. It was unpleasant surprise after several weeks of stable unemployment claims. (Event B on the chart.)
Chicago PMI dipped to 52.7 in May from 56.2 in April. Experts promised a small advance to 56.7. (Event C on the chart.)
Crude oil inventories increased by 2.2 million barrels last week and are above the upper limit of the average range for this time of year. Total motor gasoline inventories decreased by 0.8 million barrels and are below the lower limit of the average range. (Event D on the chart.) 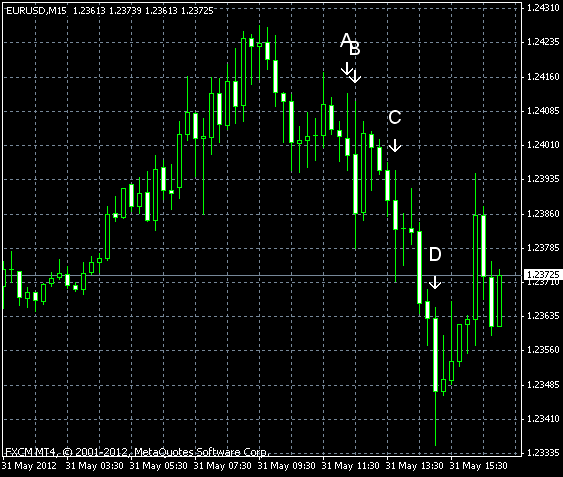