EUR/USD ended its rally today, after reaching the highest level since October 17, as the macroeconomic data from Europe was poor and Spain failed to reach target on its debt auction. The US data was a bit better, though not stellar either. On the positive side, factory orders unexpectedly grew and the services sector expanded faster than expected. On the negative side, employment growth was slower that market participants have hoped for.
ADP employment rose 118k in November from October. The rate of growth was slower that the expected 129k and the October’s 157k. The report explained:”Superstorm Sandy wreaked havoc on the job market in November, slicing an estimated 86,000 jobs from payrolls.” (Event A on the chart.)
Nonfarm productivity grew 2.9% in the third quarter of 2012 from a year ago, in line with analysts’ predictions of a 2.7% increase. The rate of growth was 1.9%. (Event B on the chart.)
ISM services PMI rose from 54.2% in October to 54.7% in November. The actual value was above traders’ expectations of 53.6%. (Event C on the chart.)
Factory orders increased 0.8% in October, while no growth was expected by market participants. The September reading was revised from 4.8% down to 4.5%. (Event C on the chart.)
Crude oil inventories fell 2.4 million barrels last week and are well above the upper limit of the average range for this time of year. The drop was much bigger than the predicted decrease by 400k barrels. Total motor gasoline inventories increased by 7.9 million barrels last week and are in the upper half of the average range. (Event D on the chart.) 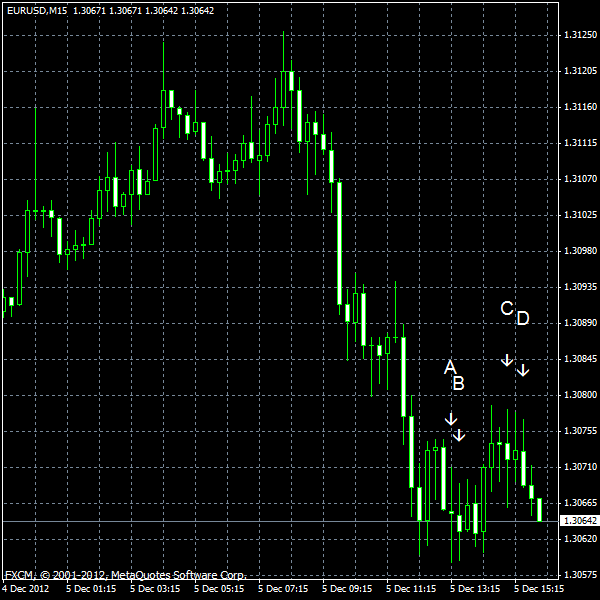