EUR/USD climbed today, rising for the third straight session, as growth of US nonfarm payrolls was far below forecasts. The unemployment rate edged down though and other reports were better than expected, but the slow employment growth overshadowed other data.
Nonfarm payrolls grew 88k in March. The growth was nowhere near the market expectations of 198k or the February increase of 268k (revised from 236k). At the same time, the unemployment rate ticked down by 0.1 percentage point to 7.6%. (Event A on the chart.)
Trade balance deficit shrank to $43.0 billion in February from $44.5 billion in January. It was expected to stay little changed at $44.8 billion. (Event A on the chart.)
Consumer credit rose $18.1 billion in February from January, beating the forecast of $15.5 billion. The January change was revised from $16.2 billion down to $12.7 billion. (Event B on the chart.)
Yesterday, a report on initial jobless claims was released, showing an increase from 357k to 385k last week. The data was a frustration for traders as they were expecting a drop to 352k. (Not shown on the chart.) 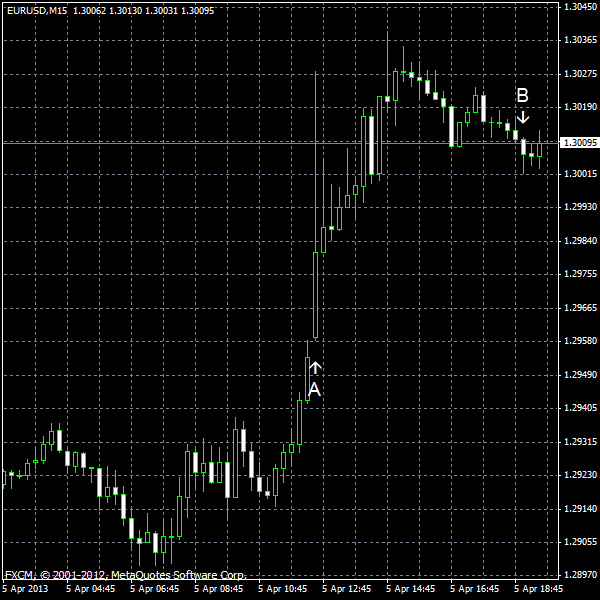