The euro fell against the US dollar for during the first days of new year trading as the macroeconomic news favored dollar bulls. There was quite a few reports this week and only a minority of them turned out negative for the US economy.
Initial jobless claims fell from 341k to 339k during the last week. The previous value was revised from a better reading of 338k, but it, nevertheless, was a positive news as the markets expected an increase to 344k. (Event A on the chart.)
Construction spending increased by 1% in the United States in November. It compares to 0.9% growth reported for October (revised up from 0.8%) and is much better than the median forecast of 0.6%. (Event B on the chart.)
ISM manufacturing PMI declined from 57.3 to 57.0 in December. It was perceived as a good news as a drop to 56.8 was forecasted. (Event B on the chart.) 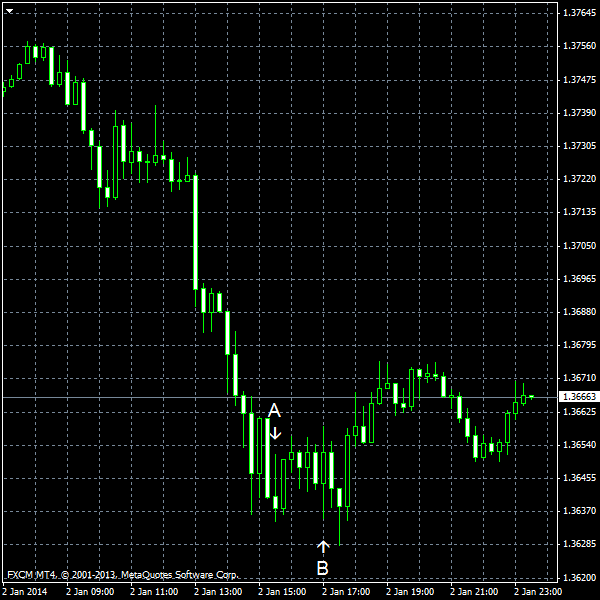 The following reports have been released earlier this week and are not shown on the chart above:
Monday report for pending home sales has shown a growth of 0.2% in November, following a drop by 1.2% in October (revised negatively from 0.6% growth). It was expected to rise by 1%.
S&P/ home price index added 13.61% in October compared to the same month a year ago. This is better than both 13.5% expected value and 13.21% September value (revised down from 13.29%).
Chicago PMI was down from 63 to 59.1 in December. This business confidence indicator fell short of the expected 61 value too.
Consumer confidence demonstrated a rapid growth in December, rising from 72.0 to 78.1 during the month. Not only it did exceed the forecast of 76.0, but the last month value has also been revised quite positively — from 70.4 level.