EUR/USD somewhat lost its ground today as mostly positive macroeconomic news from the US failed to ignite enough risk appetite to overshadow the resulting dollar strength. The currency pair reacted bearishly to every US report today, even those that disappointed bullish USD traders.
ADP employment report for December became today’s volatility trigger when it showed a gain of 238k compared to November’s 229k (revised positively from 215k). Market participants expected the indicator to demonstrate a fall to 200k. (Event A on the chart.)
US crude oil inventories continued to decline and fell by 2.7 million barrels during the week ending January 3. This drop followed a 7 million barrels decline reported for the previous week. They are now near the upper limit of the average range for this time of year. Total motor gasoline inventories increased by 6.2 million barrels last week after gaining 0.8 million barrels one week earlier. (Event B on the chart.)
FOMC minutes for the December meeting were released today, showing two important points. First, the committee believes that at this point the asset purchases program (QE) has a reduced efficiency due to its long running time. Second, Eric Rosengren (from Boston Fed) voted against tapering because he believed the data (inflation and employment) was still too weak to justify the decision. (Event C on the chart.)
Consumer credit added only $12.3 billion in November, which is significantly below both the median forecast of $14.3 billion and the October number of $17.9 billion (revised negatively from $18.1 billion). Although some people may consider lower reliance on credit as a good development, it is definitely a bad thing for the US economy as it means less consumer spending. (Event D on the chart.)
Yesterday, a report on US trade balance deficit positively surprised the dollar bulls with an unexpected drop from $39.3 billion to $34.3 billion in November of 2013. October value has been revised down from $40.6 billion. The consensus forecast for November deficit value was at $40 billion. (Not shown on the chart.) 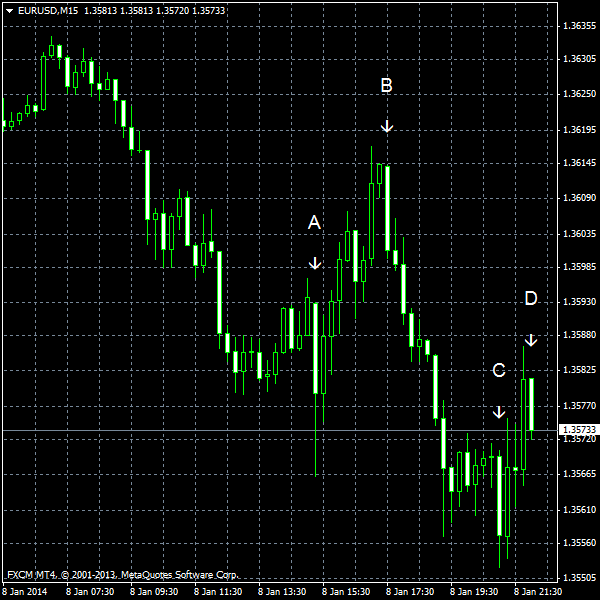