The euro has been sent to rally against the US dollar following today’s release on unemployment. It looks like the markets preferred to react to extremely negative payrolls reading (largely affected by adverse weather) than to the shrinking total unemployment rate.
Nonfarm payrolls increased by 74k in December — significantly below 197k forecast value and much worse than November’s 241k growth (revised positively from 203k). At the same time, overall unemployment rate decreased from 7% to 6.7% — a significant decline that signals an approach to critical 6.5% threshold, which can possibly trigger an end to the  interest rates in the United States. (Event A on the chart.)
US wholesale inventories added 0.5% in November, following 1.3% rise in October (revised down from 1.4%). The median forecast for this indicator was at 0.4%. Rising wholesale inventories are usually considered a negative factor as companies become less likely to purchase new goods. (Event B on the chart.)
Yesterday, a report on initial jobless claims has shown a decline from 345k (revised up from 339k) to 330k claims during the last week. The median forecast had focused on 335k value. (Not shown on the chart.) 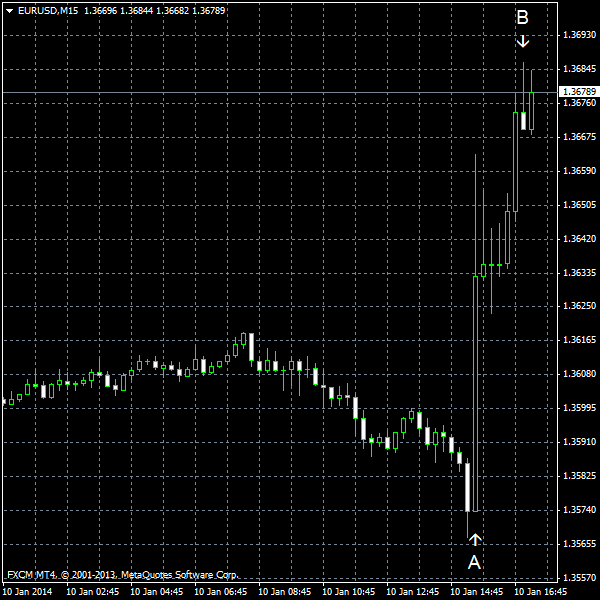