This year was not very successful for my trading performance. Out of 19 FX and commodities trades that I have executed only 4 have been profitable, while the other 15 have been losses. I have recorded a loss of 8.8% this year, with a rather big part of profit originating from my trade in silver rather than in Forex. Obviously, it is not a good result, especially compared to my last year’s 26.7% profit. 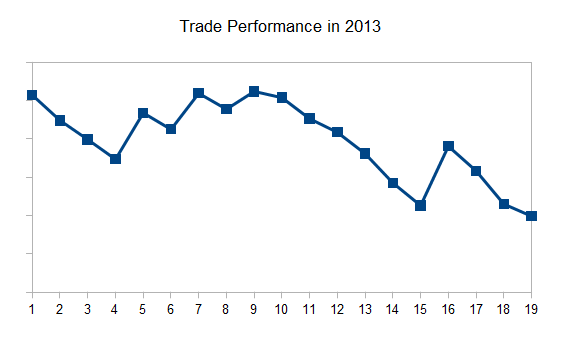 I also have an open trade currently running in CHF/JPY with about 2.5% of unrealized profit. It had been opened in September, but since it was carried over to 2014, I do not count it in my 2013 results. In addition, there is a running NZD/JPY trade opened in January and a pending trade in EUR/USD. Although both of these entry patterns have been generated in 2013, I cannot attribute any potential profit or loss generated from them to my 2013 performance.
Following my tradition started with a similar poll for the year 2012, I would like to ask you about your trading results in 2013.

If you want to give some details about your trading performance in 2013, please feel free to do so using the form below.