EUR/USD tumbled today as the German economic sentiment dropped much more than was expected, increasing chances for additional monetary stimulus from the European Central Bank in June. (Event A on the chart.) The currency pair was attempting to hold ground at the beginning of this week following the last week’s big losses but failed to do so due to the negative report. The euro lost to the dollar even though data from the United States was not particularly encouraging too.
Retail sales barely grew in April, rising 0.1%. The increase was nowhere near the predicted change of 0.5 percent. The March growth was revised positively from 1.1% to 1.5%. (Event B on the chart.)
Both import and export prices fell in April. Import prices were down 0.4%, while they grew at the same rate in March and analysts were thinking that they would keep this rate of growth. Export prices slipped 0.1% after rising 1.0% in the previous month. (Event B on the chart.)
Business inventories grew 0.4% in March, in line with expectations, following the February’s increase by 0.5%. (Event C on the chart.)
Yesterday, a report on treasury budget was released, showing a surplus of $106.9 billion in April. This is compared to the deficit of $36.9 billion in March. Economists hoped for a somewhat bigger surplus of $112.6 billion. (Not shown on the chart.) 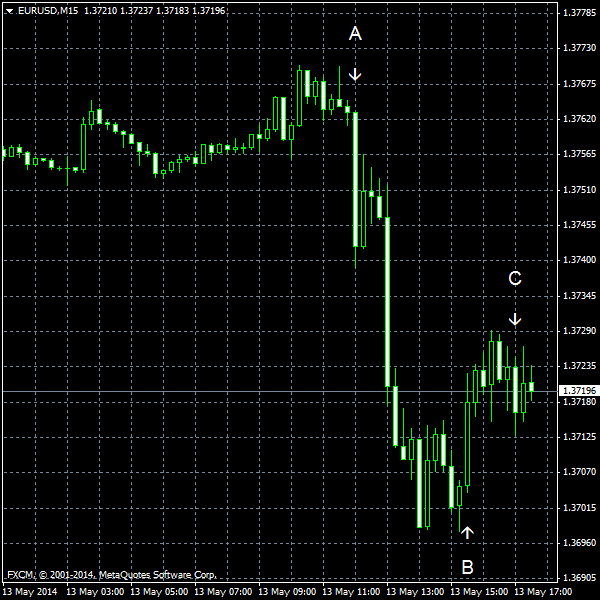