EUR/USD dropped today as economic growth in most European countries disappointed economists (with the notable exception of Germany). Gross domestic product in the whole eurozone grew 0.2% in the first quarter of 2014 from the previous three months, also being below expectations of 0.4%. (Event A on the chart.) Meanwhile, there were plenty of reports from the United States, most of which were surprisingly good, though not all of them. The currency pair managed to erase most of its losses by now despite the negative fundamentals.
Initial jobless claims dropped to 297k last week, the lowest level since May 2007, while analysts thought they would stay at the previous week’s revised level of 321k. (Event B on the chart.)
CPI increased 0.3% in April on a seasonally adjusted basis, matching forecast exactly, after rising 0.2% in March. (Event B on the chart.)
NY Empire State Index jumped from 1.3 in April to 19.0 in May, the highest level in nearly four years. The actual figure was far above the median forecast of 5.5. The report said that “business conditions improved significantly for New York manufacturers”. (Event B on the chart.)
Net foreign purchases were at $4.0 billion in March, a big slump from the February revised value of $90.3 billion. Market participants expected a reading of $32.2 billion. (Event C on the chart.)
Both industrial production and capacity utilization declined in April compared to March. Industrial production decreased 0.6% in April, compared to the forecast increase by 0.4%, after rising 0.9% in March. Capacity utilization rate decreased from 79.3% in March to 78.6% in April, while it was expected to stay at the same level. (Event D on the chart.)
Philadelphia Fed Manufacturing Index decreased slightly from 16.6 in April to 15.4 in May was above the predicted figure of 13.9. (Event E on the chart.) 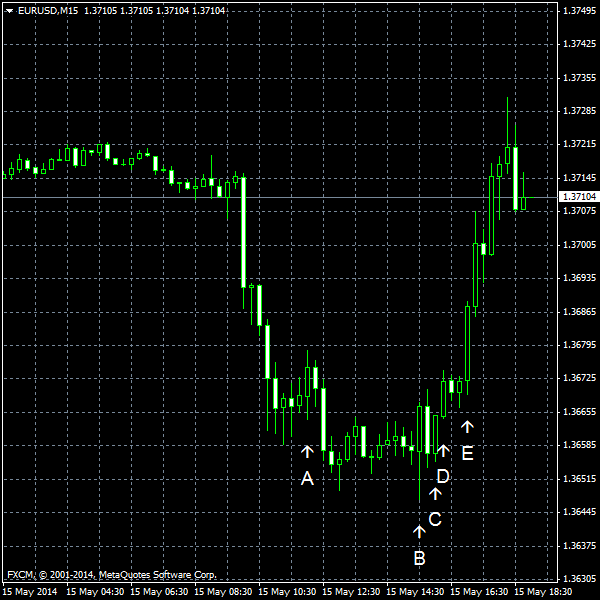