EUR/USD rose today after the Federal Open Market Committee released minutes of its September meeting, revealing that the appreciation of the dollar concerns US policy makers. The currency pair rose for the third consecutive trading session, a sign that led to speculations about an end to the euro’s decline.
US crude oil inventories increased by 5.0 million barrels last week, beating analysts’ expectations of 2.1 million, and are in the upper half of the average range for this time of year. Stockpiles were down 1.4 million in the previous week. Total motor gasoline inventories increased by 1.2 million barrels and are in the middle of the average range. (Event A on the chart.)
FOMC released minutes of its latest policy meeting. (Event B on the chart.) The minutes explained that the timing for an interest rate increase is data dependent and the statement about interest rates remaining low for a “considerable time” does not mean that there is a predetermined date for monetary tightening. Policy makers voiced concern that the dollar’s strength may pose a threat for economic growth:

Some participants expressed concern that the persistent shortfall of economic growth and inflation in the euro area could lead to a further appreciation of the dollar and have adverse effects on the U.S. external sector.

Yesterday, a report on consumer credit was released, showing an increase by $13.5 billion in August that trailed analysts’ estimates of $20.3 billion. The previous month’s growth was revised negatively from $26.0 billion to $21.6 billion. (Not shown on the chart.) 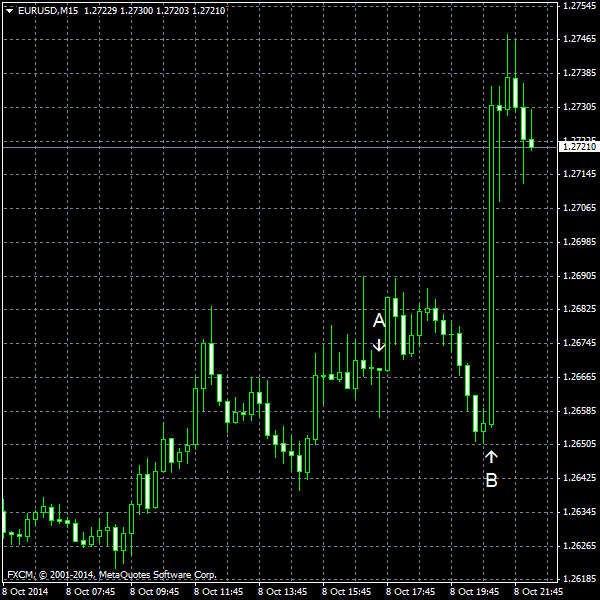