What Is the Long-Term Future of EUR/CHF?

Having sold my long EUR/CHF positions a few days ago, I still retain my interest in the potential moves of this currency pair. My last year’s poll about EUR/CHF future has shown an excessive level of bullish optimism among this blog’s readers, who expected it to go up to 1.3000 by the end of 2013.
Since SNB‘s introduction of the minimum exchange rate of 1.2000, EUR/CHF is trading in a rather narrow range with some significant bullish elevation during December 2012 — December 2013 period. During the most part of that period, there was a serious incentive for traders and investors to hold long EUR/CHF positions due to the high positive overnight rollover rate associated with that direction. As the European Central Bank became more dovish and the SNB’s stance did not change, that benefit has slowly vanished.
The current situation with the pair is very ambiguous. On the one hand, there is the Swiss National Bank with its “utmost determination” to keep the appreciation cap intact. On the other hand, Switzerland is still suffering from the same woes: zero GDP growth in Q2 2014, -0.1% consumer inflation in September, and  interest rates. The eurozone is fairing not much better: the same lack of GDP growth in Q2, 0.3% consumer inflation in September, and a mix of  and negative interest rates. Additionally, the heads of both central banks express their strong concerns regarding high Forex rates.
As you can see neither, party is doing particularly well. It means that there is no reason for EUR/CHF to move away from its current status quo. At the same time, the pair’s exchange rate will move away from its current levels sooner or later (if Switzerland does not adopt the euro, of course). And the question is: where will it head first — up or down? 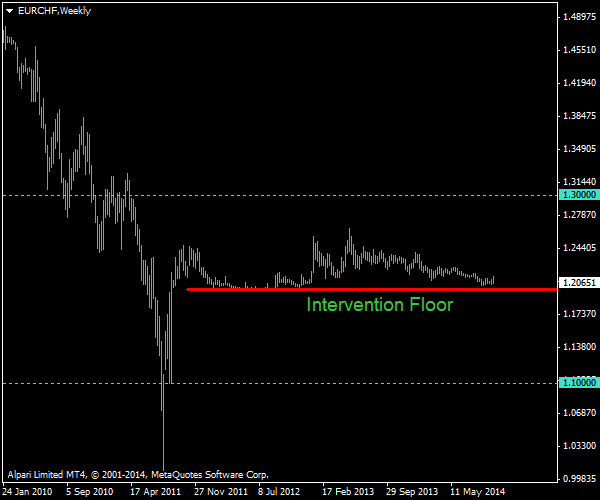 What level will EUR/CHF hit first?

PS: The poll will remain open until January 2014.

If you have a detailed forecast for the EUR/CHF currency pair, you can share it using the commentary form below.