EUR/USD advanced today as the majority of US economic reports were bad. The currency pair lost some of its gains after few positive reports were released but still trades high above the opening level.
PPI fell by 0.1% in September, while most market participants counted on an increase by the same rate. The index showed no change in August. (Event A on the chart.)
Retail sales dropped 0.3% last month versus a 0.1% drop expected by specialists. Sales were up 0.6% in the preceding month. (Event A on the chart.)
NY Empire State Index sank from 27.5 in September to 6.2 in October. The stunning drop shocked market participants who were expecting relatively small decline to 20.3. (Event A on the chart.)
Business inventories grew 0.2% in August, while analysts predicted growth at the same rate as in the previous month — 0.4%. (Event B on the chart.)
US treasury budget demonstrated a surplus of $105.8 billion in September after the deficit of $128.7 billion in August. The median forecast promised an excess of $82.3 billion. (Event C on the chart.)
On Friday (October 10), a report was released, showing that both import and export prices fell in September. Import prices declined 0.5%, in line with expectations, after falling 0.6% (revised from 0.9%) in the previous month, while export prices dropped 0.2% following the 0.5% drop. (Not shown on the chart.) 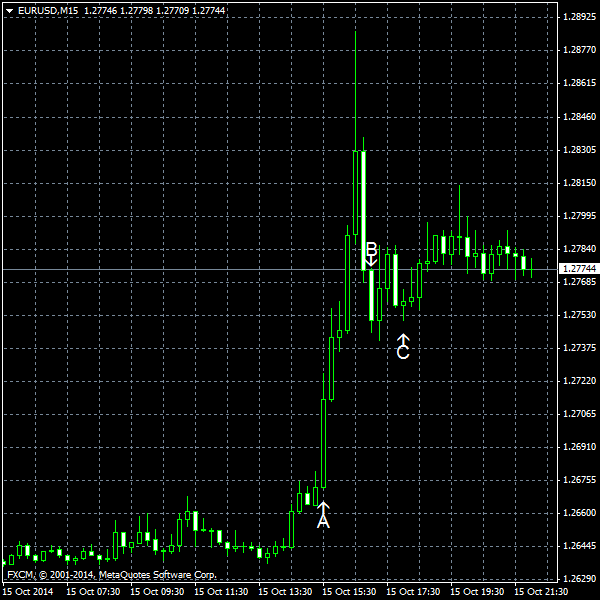