EUR/USD Drops on US Data, Attempts to Regain Strength

EUR/USD sank today, following yesterday’s big jump, as all today’s economic reports from the United States were far better than even most optimistic expectations. Yet the currency pair managed to shed most of its losses and is trading not that far from the opening level as of now.
Initial jobless claims dropped to 264k last week, the lowest level since April 15, 2000. This surprised analysts who were expecting the claims to stay barely changed from the previous week’s level of 287k. The report noted that “there were no special factors impacting this week’s initial claims”. (Event A on the chart.)
Both industrial production and capacity utilization rose in September. Production advanced 1.0% following the 0.2% drop in the previous month. The median specialists’ estimate pointed at 0.4% growth. Capacity utilization rate was up from 78.7% in August to 79.3% last month, exceeding the consensus forecast of 79.0%. (Event B on the chart.)
Philadelphia Fed Manufacturing Index edged down from 22.5 in September to 20.7 in October, but was still above the reading of 19.9 predicted by experts. (Event C on the chart.)
Crude oil inventories increased by 8.9 million barrels, while total motor gasoline inventories decreased by 4.0 million barrels last week. The actual growth of oil reserves was bigger than the predicted 2.3 million and the previous week’s 5.0 million. (Event D on the chart.)
Net foreign purchases climbed to $52.1 billion in August, above the forecast value of $23.3 billion and the July’s -$18.6 billion. (Event E on the chart.) 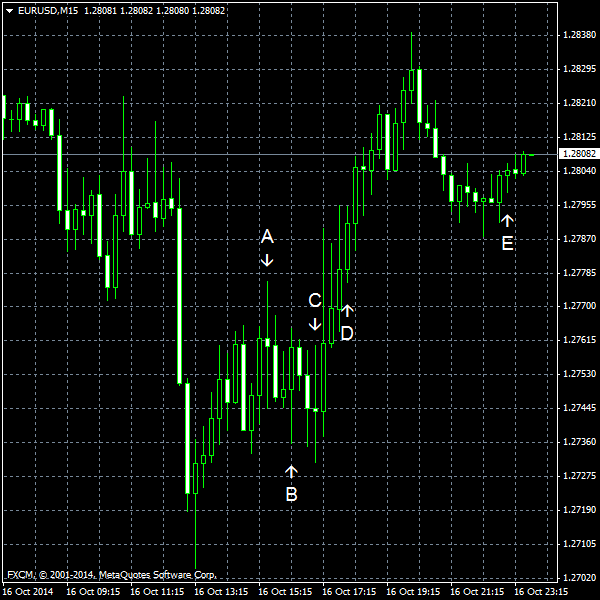