The euro gained on the dollar today as economic data from the United States was rather disappointing. EUR/USD was consolidating this week, but most experts think that the currency pair remains in a downtrend from the  point of view.
Initial jobless claims rose from 278k to 290k last week, frustrating market participants who were counting on just a small increase to 282k. (Event A on the chart.)
Crude oil inventories decreased by 1.7 million barrels last week but remained in the upper half of the average range for this time of year. Stockpiles expanded by 0.5 million the week before, and analysts have expected an increase by 0.7 million for the current reporting period. Total motor gasoline inventories increased by 1.8 million barrels last week, yet stayed in the lower half of the average range. (Event B on the chart.)
Treasury budget posted a deficit of $121.7 billion in October, which was higher than the analysts’ estimate of $111.5 billion. The previous month’s reading was at -$105.8 billion (meaning that the budget demonstrated a surplus). (Event C on the chart.)
Yesterday, a report on wholesale inventories was released, showing an increase by 0.3% in September, which was in line with expectations. Inventories were up 0.6% in August. (Not shown on the chart.) 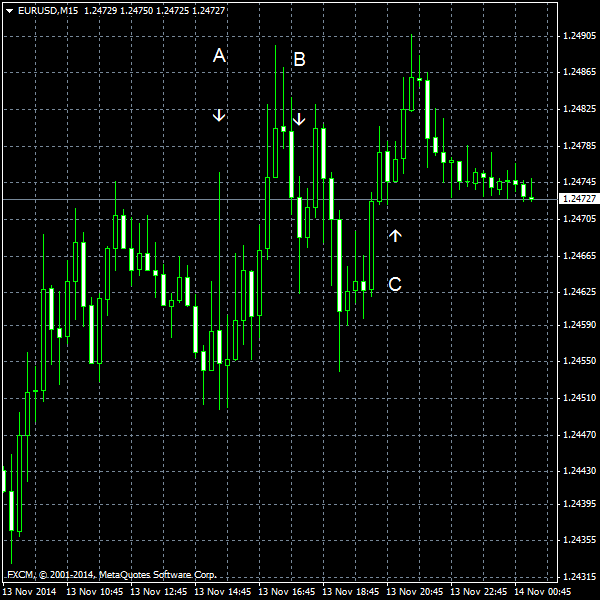