Today, EUR/USD sank to a new low in several years. The main reason for the drop was the release of US nonfarm payrolls. While forecasts were optimistic, even they did not predict such huge employment growth. The overwhelmingly positive employment data allowed the dollar to rally even though other reports were not particularly good.
Nonfarm payrolls demonstrated huge growth by 321k in November, which was far above the consensus forecast of 231k. Moreover, the previous month’s growth was revised from 214k to 243k. The unemployment rate remained unchanged at 5.8%, in line with expectations. (Event A on the chart.)
Trade balance deficit was at $43.4 billion in October, little changed from the September’s value of $43.6 billion. Traders were anticipating a decrease to $41.3 billion. (Event A on the chart.)
Factory orders dropped 0.7% in October while analysts expected no change. Orders were down 0.5% in September. (Event B on the chart.)
Consumer credit rose by $13.2 billion in October from the previous month. The increase was smaller than the predicted $16.5 billion and the September’s revised $15.5 billion. (Event C on the chart.)
Yesterday, a report on initial jobless claims was released, showing a drop from 314k to 297k last week, which was not far from expert’s predictions. (Not shown on the chart.) 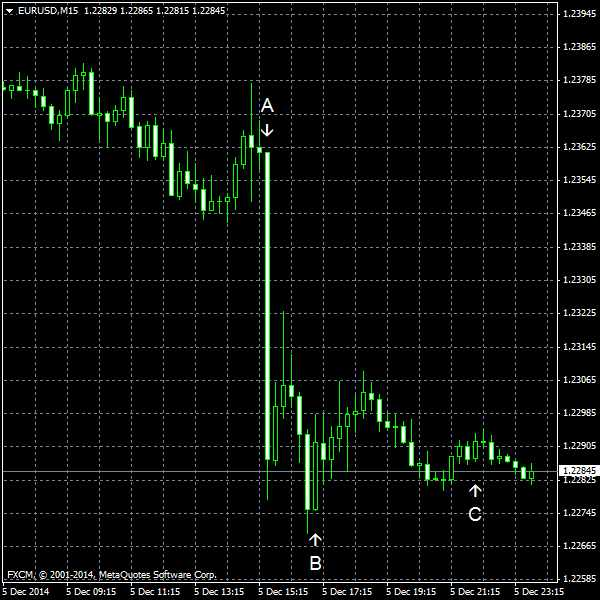