EUR/USD fell initially following the better than expected (but still weak) reports on industrial productions from the eurozone today (Event A on the chart.) The direction of trading has changed to an uptrend in less than two hours. Probably, traders realized that poor recovery is still good and justifies some euro buying. US fundamentals were far from good and played their role in EUR/USD strength.
Retail sales decreased by 0.9% on a seasonally adjusted basis in December of the last year, following a rise by 0.4% in November (revised negatively from 0.7% growth). Traders expected a small drop by just 0.1%. (Event B on the chart.)
US import and export prices decreased by 2.5% and 1.2% in December after declining by 1.8% and 0.8% in November (imports revised negatively from 1.5% fall, exports — up from 1.0% fall). Market participants expected a slightly worse import prices deflation of 2.7%. (Event B on the chart.)
Business inventories rose by 0.2% in November. It was exactly the same growth as in October. The median forecast for this fundamental indicator was 0.3% growth for November. (Event C on the chart.)
Crude oil inventories increased by 5.4 million barrels during the week ending January 9. This growth of inventories followed a drop by 3.1 million barrels. A modest increase by 1.8 million barrels has been expected. Total motor gasoline inventories added 3.2 million barrels after rising by 8.1 million barrels a week earlier. The growth was below the forecast of 3.8 million barrels. (Event D on the chart.) 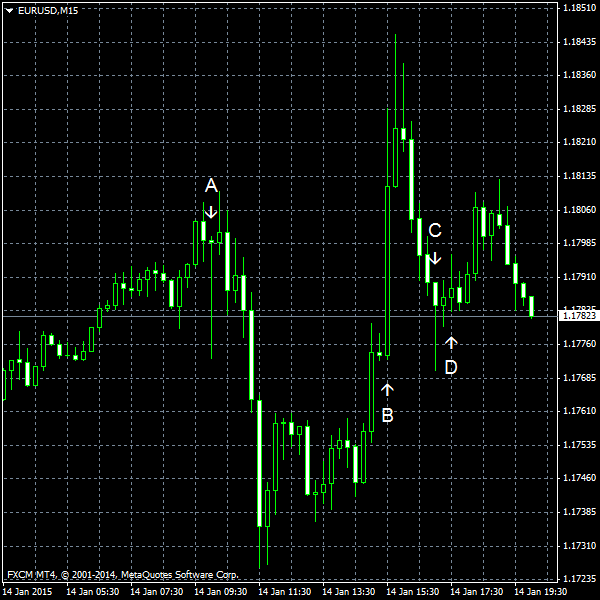