EUR/USD trades below the opening level right now. The currency pair attempted to bounce after the Federal Open Market Committee released its policy statement, reiterating words about patience in timing for raising interest rates. Yet the euro fell back quickly, and it looks like the shared 19-nation currency is going to continue moving down.
Crude oil inventories increased by 8.9 million barrels last week. The increase was below the previous week’s 10.1 million but far above the predicted 4.2 million. The stockpiles reached yet another record in at least the last 80 years. Total motor gasoline inventories decreased by 2.6 million barrels but are well above the upper limit of the average range. (Event A on the chart.)
FOMC held the first policy meeting this year. (Event B on the chart.) The statement did not reveal anything particularly new as it said that the Committee “can be patient in beginning to normalize the stance of monetary policy”. All in all, it looks like US policy makers are not in a hurry to start monetary tightening as the FOMC said:

The Committee currently anticipates that, even after employment and inflation are near levels, economic conditions may, for some time, warrant keeping the target federal funds rate below levels the Committee views as normal in the longer run. 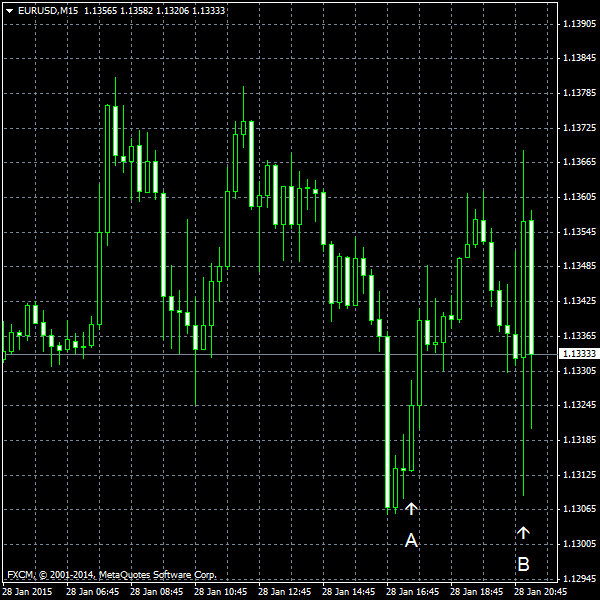