Not many traders believed that the Swiss franc’s peg may end in such an abrupt manner as it really did. It was a huge surprise to the markets, and it has raised some questions about the possibility of other currencies unpegging. Technically, franc’s appreciation cap against the euro was not a peg, but rather a minimum level for EUR/CHF pair, but nevertheless, it was still called peg by many analysts. Here is the list of some more or less important currencies that are currently pegged to other currencies:
Danish krone is a part of ERM II, which means that the currency remains pegged in a very tight band to the euro until Denmark joins the eurozone in the future. The EUR/DKK exchange rate was fixed at 7.46038 since 1999. The tolerated rate band is 2.25%, which means that EUR/DDK can fluctuate between 7.29252 and 7.62823.
There is little doubt that this peg will be maintained flawlessly, but in an extremely unlikely case of EUR/DKK unpegging, the consequences would be really disastrous. But as I said, it is really hard to imagine this peg deteriorating.
Czech koruna is pegged to the euro at the rate of 27 CZK per euro. Czech National Bank announced the peg on November 7, 2013. The koruna is trading steadily above that level except for some upward swings. It can be considered a good thing as CNB aims to keep koruna from appreciating too much as it uses a weaker currency as a monetary policy instrument: 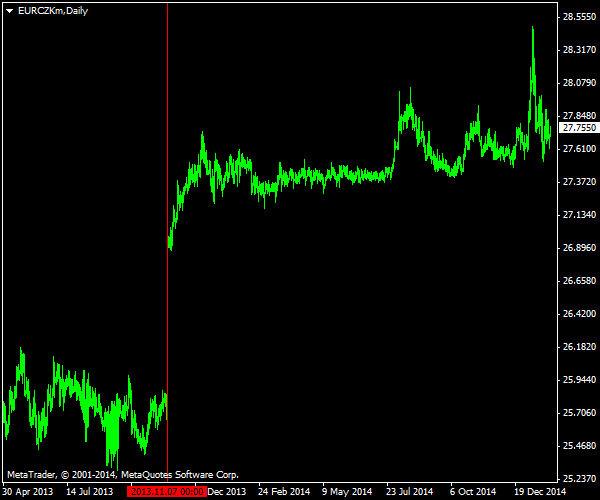 The risk here is pretty similar to that of EUR/CHF — the central bank may remove the peg anytime (though they pledge to keep at least until 2016). Additionally, the rate may be forced down in case some serious problems arise within the eurozone.
Bulgarian lev has been pegged to the German Deutsche Mark since the introduction of its fourth version in 1999. After adoption of the single European currency in the eurozone, the Bulgarian lev has been pegged to the euro at a fixed rate of 1.95583 leva per euro. The plan is for the peg to exist until the country joins the eurozone.
The risk here is very low, considering the history of keeping the peg active for so many years. A huge economic crisis in Bulgaria could be a reason for lev’s unpegging or at least its rate shift.
Bosnia and Herzegovina convertible mark is another European currency that was once pegged to the Deutsche Mark and then moved to the euro peg in 2002. Its peg rate is the same as in Bulgaria — 1.95583 per euro.
The same risk as with Bulgarian lev (or, more accurately, the lack of it) is intrinsic to the Bosnia and Herzegovina convertible mark. However, the chance of peg removal is a bit higher than in Bulgaria because the economy of Bosnia and Herzegovina is much weaker.
Renminbi (Chinese yuan) is currently in a state of a managed float. Each day, the People’s Bank of China sets a reference rate and then the currency is trading inside a 2% range from that level. The current band was enacted in March 2014. Before 2005, it was a strict peg to the US dollar. Since then, the currency exchange rate became more and more free — going up and down depending on macroeconomic factors: 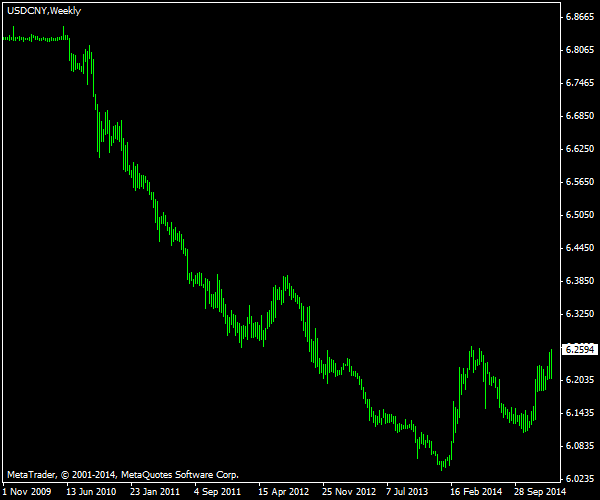 The general consensus is that the USD/CNY is too high (yuan is undervalued) and is kept high by the Chinese authorities. Western leaders often demand China to  its currency. If such a thing happens, it would push USD/CNY rate significantly lower, posing risk to everyone in the long position. On the other hand, some strong economic crisis could devalue yuan (or force government to devalue it), sending USD/CNY up. Nevertheless, both risks are currently considered as improbable.
Hong Kong dollar is pegged to the US dollar since 1972. The peg rate is moving up over years. It was 5.65 HKD per USD initially. Now it is a band of 7.75–7.85 HKD per USD. The Hong Kong Monetary Authority seems to be doing great managing this peg.
The only plausible cause for peg removal is the adoption of renminbi by Hong Kong, and it is not even planned yet. Considering the peg’s history, it would be normal to expect a gradual USD/HKD rate increase over years.
Saudi riyal was pegged to the special drawing rights (SDR) issued by the International Monetary Fund in 1986. The official peg to the US dollar has been introduced on January 1, 2003. The rate remains unchanged to this day at 3.75 SAR per one US dollar. The currency did violate the peg by 0.7% when USD/SAR fell to 3.725 during September 2007, but currency pair quickly returned to the peg rate. The fluctuations from the peg are minimal: 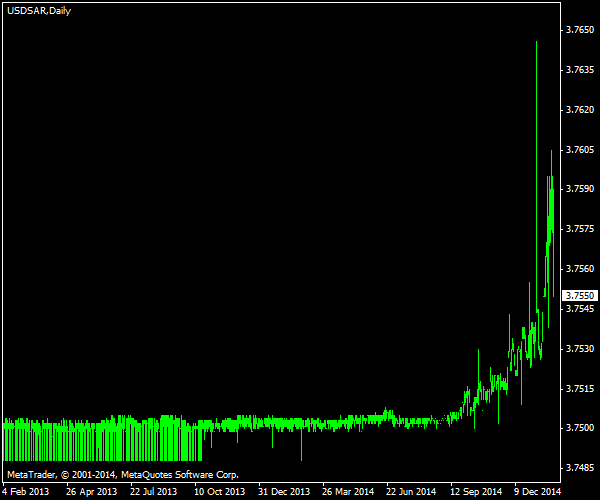 The risks of this peg are tightly connected with the global oil market. As long as there is demand for oil, there will be only an upward pressure on SAR as it is considered undervalued. If something serious hits the oil prices, there might be some downward pressure on the currency. In any case, depegging is not something that is seen as a real possibility as of now.
United Arab Emirates dirham has a peg history similar to that of the Saudi riyal. It was pegged to SDR in 1978. In 1997, it became pegged to USD at a rate of 3.6725 per dollar. The rate remains stable and there are no current plans to depeg.
The only risk for this peg is the potential creation of GCC Monetary Fund with a single currency for the Gulf countries. The chances of this happening during the current decade are slim.
Qatari riyal was pegged to IMF’s SDR since 1975. It became pegged to the US dollar at the rate of 3.64 per USD since 2001. The peg offers a very tight bid/ask spread of 3.6385 and 3.6415.
Similarly to its oil peers, QAR has very few chances to become a  currency in the near future. The peg looks very stable despite fluctuating oil prices and FIFA 2022 controversies.
I, personally, believe that EUR/CHF’s floor removal has little to do with other pegs. It certainly does not mean that any of the mentioned pegs should fail in 2015. The only weak one I see is EUR/CZK, but even it will persist in my opinion. And what do you think about this situation?

Which currency’s peg will fall next?

If you have something to say about the existing currency pegs and how they will affect the Forex market in the near future, please feel free to submit your thoughts using the commentary form below.