EUR/USD dropped on Thursday, demonstrating the biggest loss so far this month. The dollar gained as the core components of consumer inflation went up 0.2 percent last month, above expectations, while European policy makers were talking about necessity of additional stimulus for Europe’s struggling economy.
USD CPI fell 0.2% in September, in line with expectations, after declining 0.1% in August. At the same time, core CPI rose 0.2% versus the forecast increase of 0.1%.(Event A on the chart.)
Initial jobless claims dropped from 262k to 255k last week on a seasonally adjusted basis instead of rising to 269k as was predicted by analysts. (Event A on the chart.)
NY Empire State Index was -11.4 in October. It was an increase from the previous month’s figure of -14.7. Forecasters had promised even better reading of -7.3. (Event A on the chart.)
Philadelphia Fed manufacturing index was in the same situation as its October’s reading of -4.5 was better than the September’s -6.0 but worse than market expectations of -1.8. (Event B on the chart.)
Crude oil inventories swelled by 7.6 million barrels last week, exceeding both the median forecast of 2.2 million and the previous week’s gain of 3.1 million. Total motor gasoline inventories decreased by 2.6 million barrels last week but remained above the upper limit of the average range. (Event C on the chart.)
Treasury budget demonstrated a surplus of $91.1 billion in September. While the excess was not as big as $93.8 billion promised by experts, it was much better figure than the $64.4 billion deficit registered in August. (Event D on the chart.) 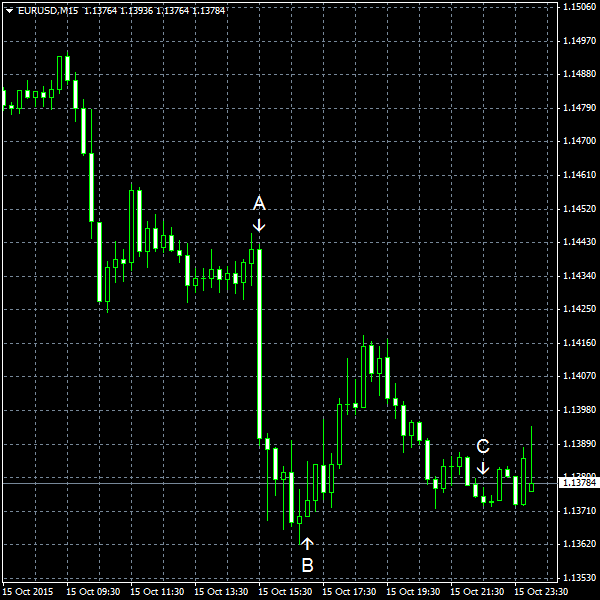