US nonfarm payrolls were released today, and they were basically in line with expectations. Yet this did not prevent EUR/USD from sinking after the release. It was the first drop for the currency pair after four sessions of gains. As for other reports, manufacturing data was decent while construction spending fell unexpectedly.
Nonfarm payrolls demonstrated an increase by 215k in March which was slightly above the median forecast of 206k. The February’s reading got a small positive revision from 242k to 245k. Unemployment rate made an unpleasant surprise, rising by 0.1 percentage point to 5.0% instead of remaining unchanged as analysts had predicted. Average hourly earnings rose 0.3% after falling 0.1% in February, compared to the forecasts of a 0.2% increase. (Event A on the chart.)
Markit manufacturing PMI rose only slightly to 51.5 in March from February’s 51.3. The final value matched the consensus forecasts exactly and was very close to the flash estimate of 51.4. (Event B on the chart.)
ISM manufacturing PMI demonstrated far better performance, climbing from 49.5% to 51.8% last month, rising above the predicted level of 50.8%. (Event C on the chart.)
Michigan Sentiment Index was at 91.0 in March. While it was below the February’s figure of 91.7, the revised estimate beat analysts’ expectations of 90.6 and the preliminary estimate of 90.0. (Event C on the chart.)
Construction spending fell 0.5% in February from January. This was a total surprise to experts who had promised an increase by 0.2%. On the positive side, the January’s increase was revised from 1.5% up to 2.1%. (Event C on the chart.) 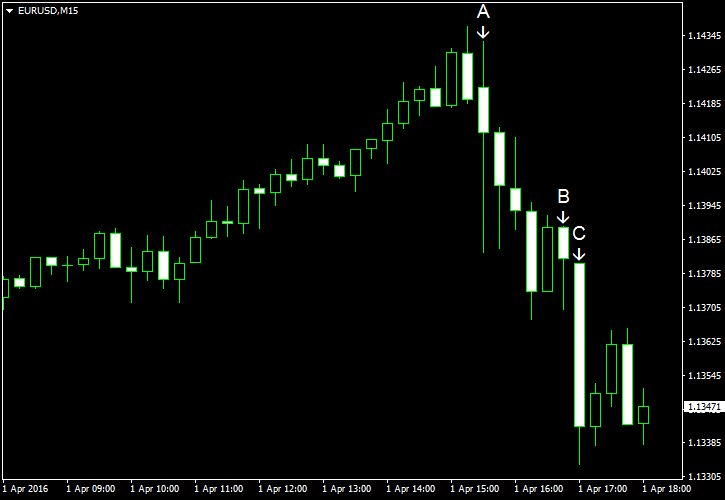