EUR/USD slumped today as the dollar was broadly stronger during the current trading session. While the rise of crude oil and gains of global stocks were helping risky currencies earlier, now the sentiment has reversed. Traders considered the possibility that the good news can encourage the Federal Reserve to proceed with monetary tightening. Such view was beneficial to the greenback and detrimental to other currencies. The dollar managed to gain on the euro even though today’s data released from the United States was rather poor.
PPI fell 0.1% in March instead of rising 0.3% as analysts had predicted. The index was down 0.2% in February. (Event A on the chart.)
Retail sales dropped 0.3% last month while experts had promised an increase by 0.1%. The previous month’s reading was revised positively from -0.1% to 0.0%. (Event A on the chart.)
Business inventories decreased by 0.1% in February, the same as the revised January reading. Forecasters had predicted a 0.1% increase. (Event B on the chart.)
US crude oil inventories swelled by 6.6 million barrels last week. It was a far bigger increase than 0.9 million predicted by analysts. The stockpiles shrank by 4.9 million the week before. Total motor gasoline inventories fell by 4.2 million but remained well above the upper limit of the average range. (Event C on the chart.) 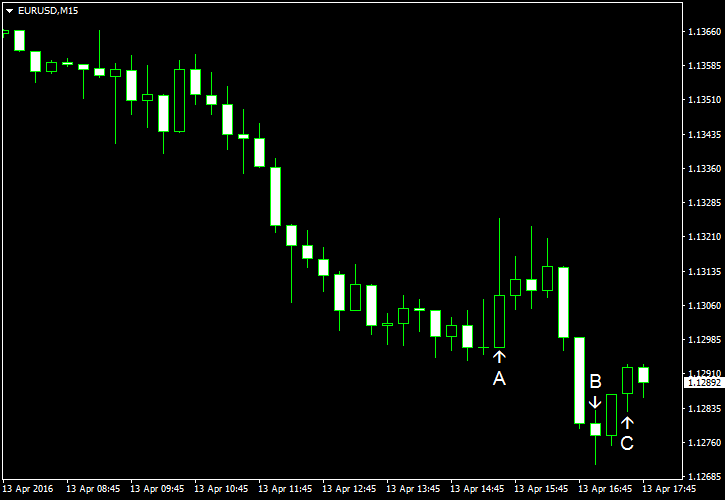