How Good Is Sentiment Analysis in Forex?

As per efficient market hypothesis, it is almost impossible to outperform the market. The reason is that marketâs efficiency ensures that relevant details of an asset are incorporated in the prevailing trading price. It means that, theoretically, there is no possibility of buying and selling an asset low and high respectively. Thus, a trader can outperform the market only through the purchase of riskier assets. However, practically, it is not always the case. There are instances where a currency remains undervalued or overvalued for a prolonged period of time. This contradiction can be explained only through the impact of traders’ sentiment on the market.
This article looks at the sentiment analysis, which is turning into a  subject (along with technical and fundamental analysis) for making successful trading decisions.
Introduction to sentiment analysis

A sentiment is purely a signal, indicating the probable direction of the price movement of an asset. The sentiment analysis or opinion mining is the process of assessing the undertone of a financial market by studying the most relevant and recent information about a particular asset or the market as a whole.
The sentiment analysis is done based on the behavioral assumption that some positive signals will lure more traders to buy the asset, thereby resulting in a rise in the price and .
Measuring sentiment analysis
The price movement of an asset has a strong correlation with the market sentiment. This correlation can be analyzed. The sentiment can be assessed by selecting the relevant news or facts, the data as required, and, finally, weighing the information in a systematic manner. This process of understanding the crowd psychology involves a series of steps described below:
Categorizing the mood of market participants
The first step in the sentiment analysis is validating the mood of the market participants. Broadly speaking, a participant in Forex or any other financial market is prone to four different kinds of mood swings: happiness, sadness, calmness, and disappointment. In general, when the economic news that emerges out of some country turns out to be , Forex traders who are long the respective currency turn happy, which is a sign of bullishness. Similarly, the same traders generally turn sad (or bearish) when the announced economic data is negative. A trader will become disappointed if the economic data misses the forecasts by a small margin. Finally, a trader will remain calm when the economic data is neutral or just meets the analystsâ estimates. These four different kinds of mood swings, when collected and studied over a particular period of time, tell us the overall sentiment of the market towards an asset.
Determining the data sources
To begin with, the Forex trader should first of all identify the proper data source for analysis. Usually, when performing the sentiment analysis using social signals, the analysts look at the following networking platforms:

Data collector
Analysts receive data from the sources through RSS feeds or similar methods. It is then stored in a database (e.g., XML file), which is also referred to as the collector.
Keyword list
The keywords enable further classification of the received news. While doing a sentiment analysis in the Forex market, the keywords can be the names of the currency pairs (EUR/USD, USD/CHF, GBP/JPY, etc.), an important economic event (nonfarm payroll, jobless claims, GDP, interest rate), or a political event (Brexit referendum for example). The keyword triggers a particular event data to be saved separately for further processing. In the case of a sentiment analysis for an equity market, the common keywords would be the name of the equity, ticker symbol, 12-month high/low, bonus, dividend, stock split, merger, acquisition, takeover bid, efficacy ratio, etc.
The keywords remain in the database and can be altered if necessary. Usually, as many as 5,000 keywords (D1) would be present in the data base. The above words can only draw the relevant data but cannot reflect the opinion of the crowd. To do so, specific words that can reflect the opinion of the market participants with respect to a Forex pair or any other asset being analyzed are used. The parsing algorithm takes care of that process as explained in the next section.
Filtering
The parsing algorithm removes the spaces, punctuation, emoticons, and all other commonly found syntax from the received data. Uncorrelated data, if any, is also removed by the filter.
In the database, there will be another set of words (D2) based on the established Profile of Mood States (POMS) questionnaire (psychometric).  If necessary, more words can be added to it, depending on the nature of the asset being dealt with. The word list allows identification of the mood of an investor or speculator. For example, âwowâ, âbeatâ, âtopsâ, âexceedsâ, and âsurpassesâ indicate a happy or bullish mood. Once a match is found, the corresponding mood swing is allocated to that news. Furthermore, a score of â+1â is given to a positive mood swing, â-1â to a negative mood swing, and â0â to a neutral mood swing. The filter also ensures that data older than a  number of days is avoided. The  filtering process is provided below:

Individual score computation
On a given day, the number of positive, negative, and neutral instances for every keyword is calculated. By adding the positive, negative, and neutral values, the overall value of the mood swing for that keyword is found. In the same manner, the overall value of the mood swing for all the keywords pertaining to an asset being analyzed is calculated. Finally, the average score of all the keywords are calculated to arrive at the opinion of the market about the asset.
Let us assume that the sentiment analysis is done for the British pound. In this case, the data collector will receive the news from multiple sources discussed above and save it as an XML file. Using the keyword list (D1), all the data and related news pertaining to the pound will be retrieved. The POMS world list (D2) will then be matched with the retrieved data to identify the positive, negative, and neutral instance.
Let us assume that for a given keyword, the positive, negative and neutral instances are 5, 3, and 2 respectively. As mentioned earlier, for every positive and negative instance, a score of â+1â and â-1â respectively is provided. Similarly, a score of â0â is provided for a neutral instance. So, the score for the keyword would be +2 (5–3+0). In the same manner, the score for every keyword pertaining to that asset is calculated.
Again, for the ease of calculation, let us assume that the number of keywords is 3 and the score for each of the keyword is +2, +3, and -1. Now, the overall sentiment is calculated by calculating the average score of the keywords. The calculation results in a score of +1.3. This indicates that the sentiment is bullish with a slight positive score of 1.3.
Creating score map
In the example discussed above, the calculated score of +1.3 is for a single day. In the same manner, the scores are calculated on a daily basis and then plotted in a chart with dates on the  and scores on the . Let us assume that the past five days scores of the Great Britain pound are: +1.3, +2, -1.2, +1.2, and 0.4. The sentiment graph for the pound would look like this: 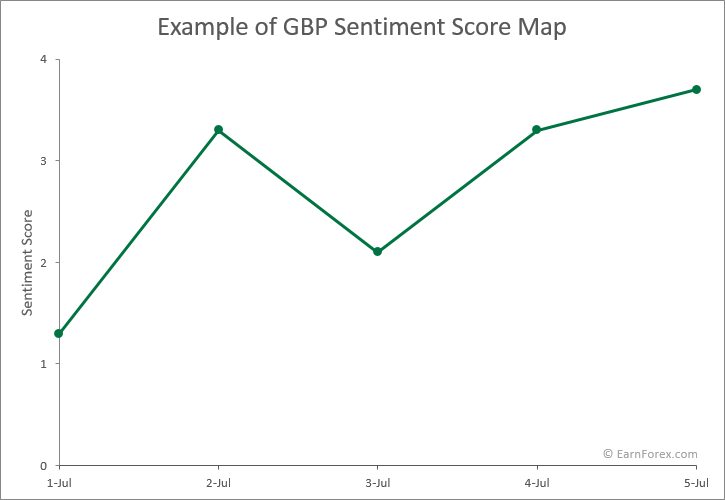 Commercial and  traders
A trader who uses futures contracts to hedge risk is categorized as a commercial trader. Usually, traders submit form 40 to disclose their trading intention to the CFTC. A trader who speculates in the market is categorized as a  trader.
Reportable and  positions
Clearing members, futures commission merchants, and foreign brokers should compulsorily file daily report as long as their net positions are above specific levels stipulated by the CFTC. The levels are updated by the CFTC depending on the existing market conditions. In general, the reported positions would be between 70% and 90% of the total open interest in the market. The open interests of those traders who have insignificant volume (below the level prescribed by the CFTC) come under the  positions.
Disaggregated COT report
Beginning from 2009, CFTC started publishing the Disaggregated Commitment of Traders (Disaggregated COT) report along with the legacy COT report.
The Disaggregated COT report is another attempt by the CFTC to improve transparency. The report segregates the traders into four different categories:

The Disaggregated COT report is published along with the legacy COT report.
Producer/Merchant/Processor/User
Entities that handle commodities physically come under this category. Such enterprises use futures to hedge risks.
Swap dealers
Any organization which deals in swaps and uses the futures market to hedge risk comes under this category. The counter party to a swap dealer can be a speculative trader, hedge fund, or even a commercial trader. It should be noted that swaps are not exchange traded contracts. These contracts are traded between the firms and large financial institutions.
As of 2011, the financial institutions that dominated the swap market were:

According to the Bank for International Settlements (BIS), the notional value of swap contracts traded in 2012 was $642.1 trillion. The swap dealers have an association named International Swaps and Derivatives Association (ISDA). When the CFTC started publishing the Disaggregated COT report, the ISDA made several attempts to remove their transactions from the commercial tradersâ category. Such is the importance of the groupâs activity in the international financial markets.
Money managers
Individuals registered with the CFTC as a Commodity Trading Advisor (CTA) or Commodity Pool Operator (CPO).
Other reportables
Any other kind of trader who does not come under any of the categories mentioned above.
It should be noted that Disaggregated COT report is available only for the commodity markets. Currency, bond, and index traders will have to use the legacy COT report and/or Traders in Financial Futures (TFF) report.
Interpretation of COT report
A typical Disaggregated COT report for the crude oil is provided below: 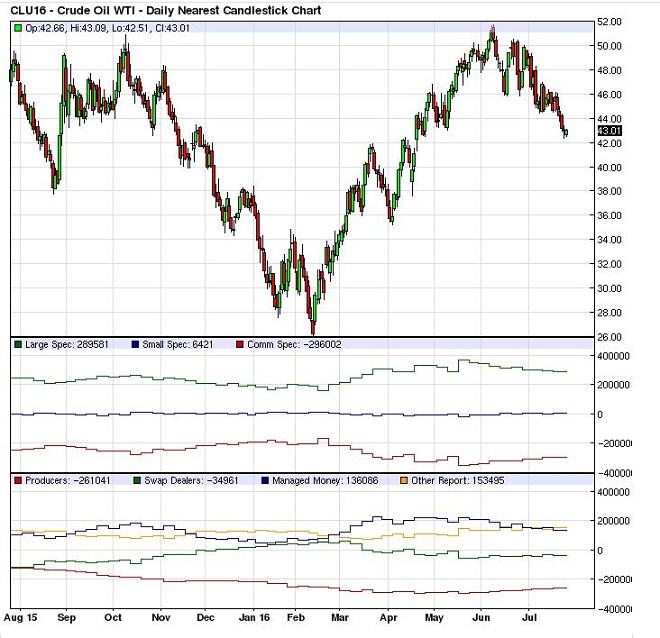 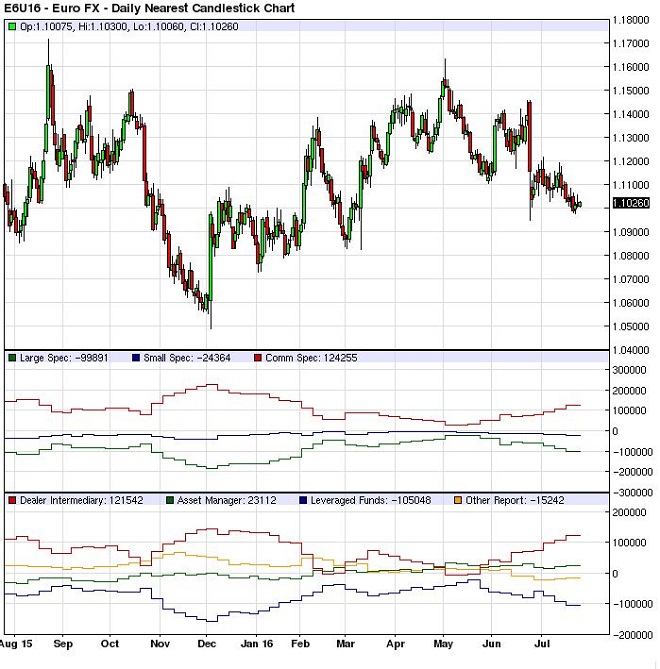 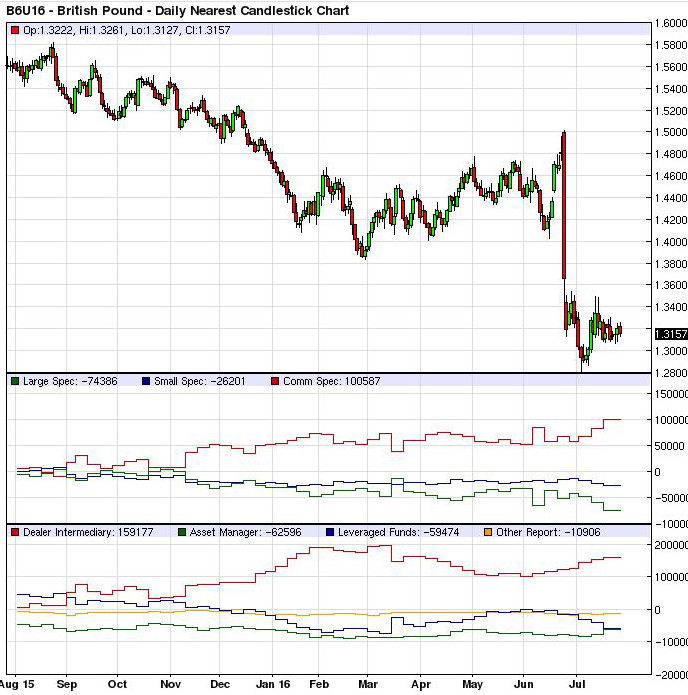 Simultaneously, the large speculators increased their net long positions in the Japanese yen. The COT chart below reveals that quite clearly. 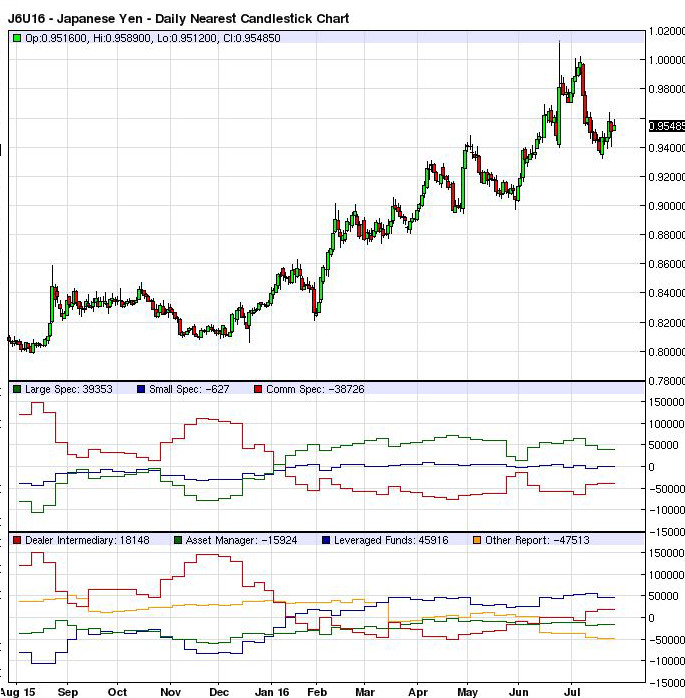 When large investors take opposite positions in two currencies, the corresponding currency pair would exhibit sharp a rise in volatility in the spot market. In this case, the GBP/JPY exhibited a steep decline as shown below. 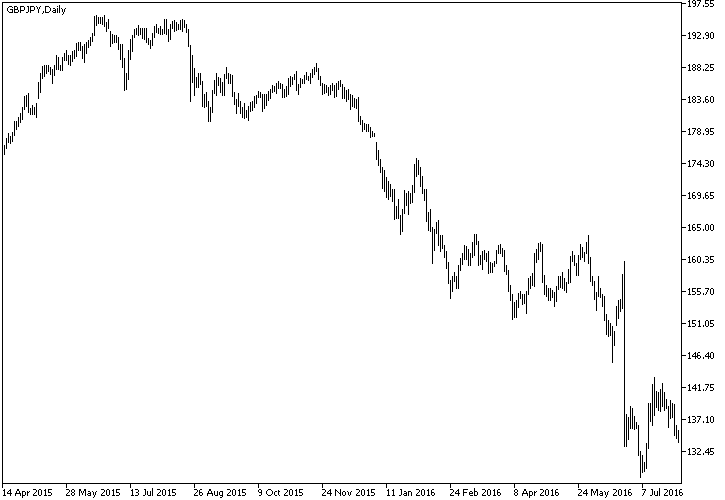 On the other hand, if the large speculators take a similar position in two currencies in the futures market, then the volatility will not be high in the corresponding currency pair. The COT chart for the Australian dollar can be seen below. 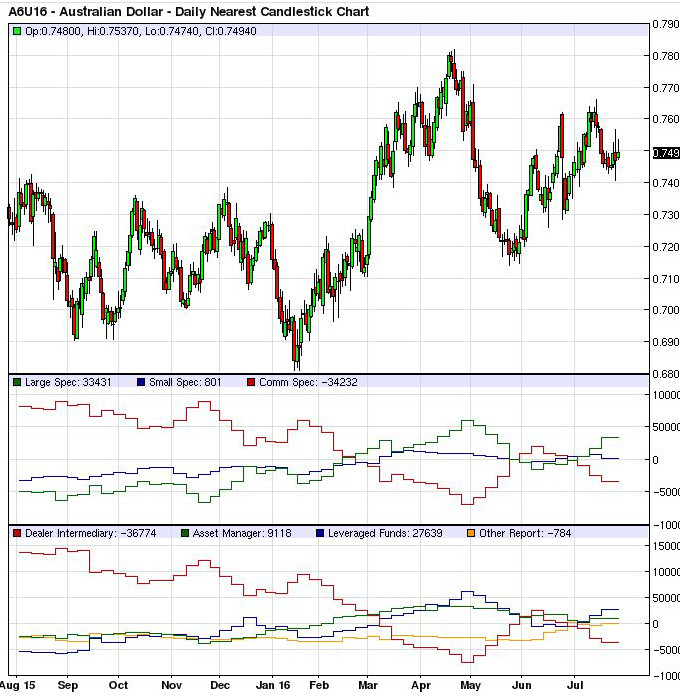 The COT chart for Japanese yen is repeated here:

The cumulative effect is demonstrated on the chart below: 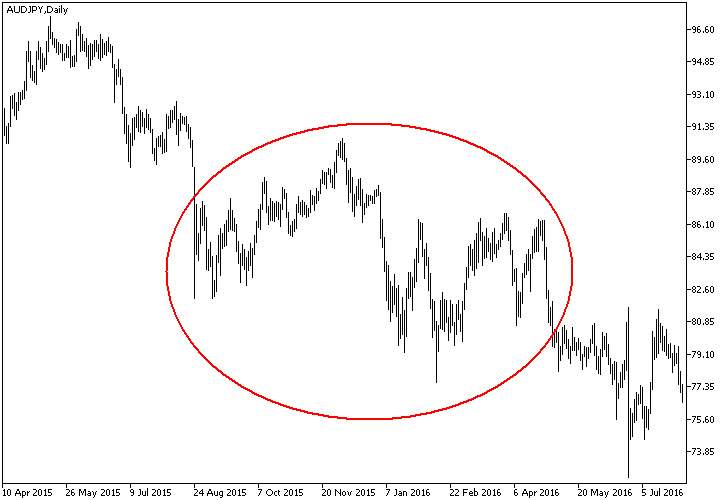