EUR/USD was moving down today, and extended its decline after rather positive ADP employment data. Now, traders eye Friday’s nonfarm payrolls, which are expected to show about the same growth as in the ADP report. Meanwhile, speculations about future steps of the Federal Reserve continue to dominate the Forex market as speculators are arguing whether the US central bank is ready to resume its monetary tightening.
ADP employment increased by 179k in July. That is compared to the previous month’s revised growth of 176k and the experts’ prediction of 171k. (Event A on the chart.)
Markit services PMI was unchanged at 51.4 in July from June according the revised reading. It was better than the preliminary estimate of 50.9 and the analysts’ projections of 51.0. (Event B on the chart.)
ISM services PMI dropped from 56.5% in June to 55.5% in July, below the specialists’ median forecast of 56.0%. (Event C on the chart.)
US crude oil inventories rose by 1.4 million barrels last week instead of falling by 1.6 million as forecasters had predicted. The stockpiles expanded by 1.7 million the week before. Total motor gasoline inventories dropped by 3.3 million barrels but remained well above the upper limit of the average range. (Event D on the chart.)
Yesterday, a report on personal income and spending was released, and it showed that both indicators rose in June. Income was up 0.2%, the same as in May but a bit below analysts’ forecasts of 0.3%. Spending also rose at the same rate as in the preceding month — 0.4%, which was above the analysts’ consensus estimate of 0.3%. (Not shown the chart.) 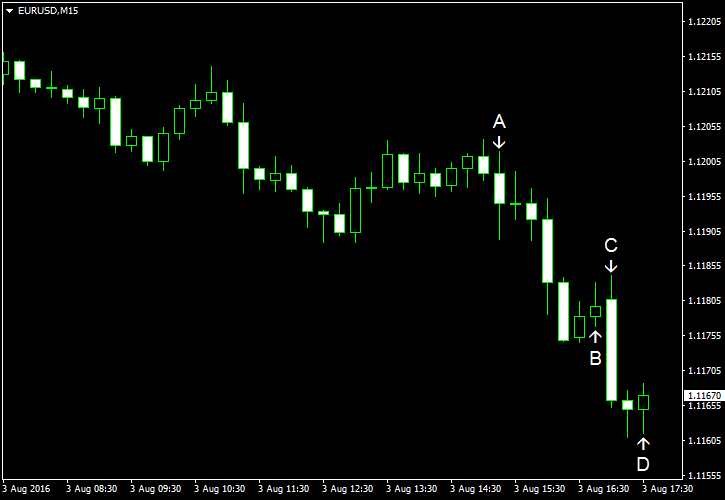